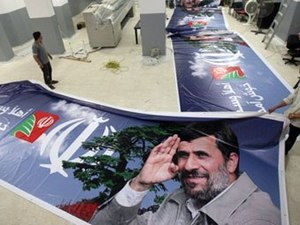 Residents of southern Lebanon are brimming with excitement ahead of a visit by Iranian President Mahmoud Ahmadinejad, who is expected to tour the border area with his arch-enemy Israel in a message of defiance.

"I can't wait to see Ahmadinejad get close to the barbed wire and show the Israelis that he has them by the throat," said Abdullah, of the border village of Kfar Kila, who refused to give his real name.

"Can you imagine? He is going to stand barely a meter (yard) from Israel and that's so symbolic," added Abdullah, who runs a restaurant at Fatima Gate, just beyond the border fence between the two countries.

The Iranian leader's visit to Lebanon October 13 and 14 is at the invitation of his counterpart Michel Suleiman.

The official first day of the trip, his first to Lebanon since he became president, is expected to proceed smoothly.

It is the second part the following day, when Ahmadinejad is set to be taken on a tour of the south by the Shiite militant group Hezbollah -- considered a proxy of Iran -- that has prompted jitters.

Members of Lebanon's pro-Western parliamentary majority have labelled that a provocation. That is especially so as it comes at a time of high tension over unconfirmed reports that a U.N.-backed tribunal is set to charge Hizbullah members in connection with the 2005 assassination of Rafik Hariri, the current prime minister's father.

Washington, which along with its allies is embroiled in a long-running dispute with Iran over its controversial nuclear program, this week also expressed concern over Ahmadinejad's visit, and Israel likened it to "a big landowner coming to inspect his property."

Hizbullah, which is blacklisted as a terrorist organization by the United States, has provided no details on the visit but preparations for a hero's welcome are going full throttle in areas controlled by the militant party.

Iranian flags and huge banners with a photo of Ahmadinejad along with a welcoming message in Arabic and Farsi have been put up along the highway leading to Beirut's international airport. The hardline leader's portraits can also be seen in Hizbullah's stronghold in southern Beirut.

In the south, Ahmadinejad is expected to visit the village of Qana, which suffered deadly Israeli raids in 1996 and 2006, and Bint Jbeil, a Hezbollah bastion and border village destroyed during the 2006 war between Hezbollah and Israel.

He is also due to inaugurate a tourist park named "Iran Garden" in the nearby village of Maroun al-Ras, which was funded by Iran and includes a small reproduction of Jerusalem's Al-Aqsa mosque.

A visit to a war museum built by Hezbollah in the town of Mlita is also reportedly on the program.

"We owe our survival to Iran," said Taleb, a resident of Bint Jbeil who owns an auto parts shop. "Ahmadinejad is a real man of faith."

The Islamic republic heavily financed the reconstruction of southern Lebanon after the 2006 war and more recently said it stood ready to offer military aid.

"Iran helped us more than the Lebanese state," said Khadijeh, 70, a resident of Qana who hoped to thank Ahmadinejad personally.

Abdullah for his part said nothing could stop the Iranian leader from visiting the volatile border region.

"No country can prevent him from coming here," he said. "He is the head of a nuclear power and Israel wouldn't dare do anything to harm him."

But not everyone in the region is jumping with joy at the Iranian leader's visit, especially in villages outside Hizbullah's influence, such as Marjayoun, which has a mix of Christian and Muslim residents.

"The situation is already tense in Lebanon and why raise that tension further?" asked Rami, a Christian shop owner.

Added Salwa, a 50-year-old baker: "This visit can provoke the Israelis and end up dangerous for us."(AFP)