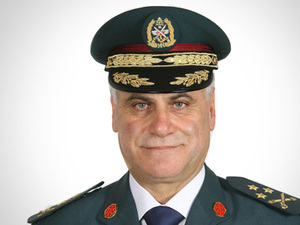 "There are no negative signs at present of repercussions of regional conflicts on the Lebanese arena," Qahwaji said during a meeting with command chiefs and unit commanders in Yarze.

"The more Lebanon is immune, the less vulnerable the country is from external repercussions," he added.

He gave instructions regarding the necessary tasks of the units in the next phase -- at the forefront to defend Lebanon against Israeli threats, combat terrorism and preserve civil peace.

On the internal situation, Qahwaji said that differences between the various Lebanese sides are basically a democratic phenomenon, particularly if it does not harm fundamental national principles.

"But linking this variation with statements on division and strife pose a threat to the country and we will not allow that at all," he warned.

Qahwaji said there is no "fear on the path of security and stability in Lebanon regardless of how much these developments reach."

"The army will strongly confront any attempts to stir discord or put our own citizens at risk under any circumstances," he warned.