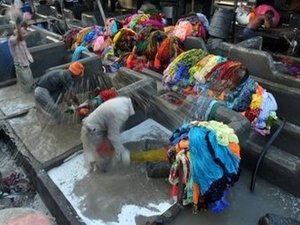 At Mumbai's open-air Dhobi Ghat, Prem Shankar Kanojia picks up items from a pile of laundry stacked at the side of a concrete washing tank and submerges them in water murky with soap suds and grime.

Once the shirts and sheets have been soaked thoroughly, he raises each piece high above his head and smashes it down repeatedly on a large flat stone made smooth by years of pounding.

Hard-working "dhobiwallahs", or washermen, like Prem have cleaned Mumbai's clothes and bedding like this for generations, confident that the dirt and sweat of the city will provide them with a constant livelihood.

But like many in Dhobi Ghat, Prem, who followed his father into the business, a life of dunking, thrashing and drying up to 1,000 items of clothing each day for just $7, is now not so sure.

"The problem is that we are not getting enough proper clothes because so many homes have washing machines," he told Agence France Presse.

"We don't expect enough work in the future because everyone is washing clothes at home. Where we used to get 100 clothes, now we struggle to get 10."

With its rows of tanks, flogging stones and bare-chested washermen in checkered lunges, Dhobi Ghat -- the location for a new Bollywood film of the same name -- is an unlikely tourist attraction in India's hectic financial hub.

Mumbaikars often fail to see the curiosity in such a mundane task.

Yet every day, clean shirts and sheets of all colors can be seen billowing from the railway bridge near Mumbai racecourse -- a triumphant result of the hours of back-breaking labor.

At ground level, the 25-acre (10-hectare) ghat bustles with activity, as fresh loads of dirty laundry are delivered through the narrow lanes of corrugated-roofed shacks by handcart or expertly balanced on heads.

Prem, whose lined face, white stubble and spindly frame make him look older than his 40 years, admitted that the job is tough, particularly when the monsoon rains arrive.

"You have to work very hard," he explained. "Everything hurts when you beat the clothes and move your arms up and down all the time. We have to stand in the water all day for eight to 10 hours."

The chaotic activity contrasts with the electrical showroom just a short drive away, where neon lighting shows off the regimented lines of shiny chrome, grey and white washing machines on polished marble tiles.

Like many ordinary Indians who have seen their disposable incomes rise as the country's economy expands, Fatima Safi Kabir can now afford to dispense with the services of the dhobiwallahs for good.

Washing clothes at home is not only more convenient but quicker and items are also less likely to disappear in the bundles of linen at the ghat, she says.

"If you send the clothes out to wash you have to count them, be there for the pick-up and delivery," she added. "If you're not there, you don't get the clothes."

The increase in the market for "white goods" in India isn't the only concern of the washerfolk of Dhobi Ghat, though. Economic growth has also created more people wanting to spend their new-found cash on better places to live.

Skyscrapers now loom over Dhobi Ghat, towering half-built or nearing completion out of the matchbox tenements or "chawls" that line the busy roadside and are home to the city's poorest workers.

The luxury apartment blocks are marketed at Mumbai's increasing number of millionaires, courted by the municipal authorities and property developers.

The city's 10,000 or so dhobiwallahs -- trying to keep Mumbai's millions clean while themselves living in poverty and squalor -- wish some money could be found to improve conditions for them.

Badri Kankaiya suggested their plight is a familiar one in modern India: little or nothing changes for the millions at the bottom of the pile, whatever the rate of economic growth.

"Dhobi Ghat hasn't changed in 20 years," he said. "First it was good, now it's worse. Now everything is expensive but our work hasn't increased.

"Builders can come with their money. The rich man lives in wealth but the poor man will die poor. We only want the land, not the money. We just want to stay here and work hard."