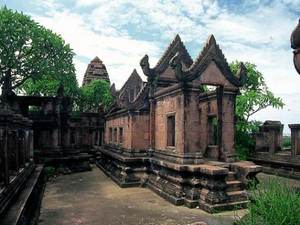 Built atop a cliff in the 11th century to honor the Hindu god Shiva, the Preah Vihear temple is the most celebrated example of ancient Khmer architecture outside of Cambodia's Angkor Wat.

Constructed under Cambodian King Suryavarman I during the 600-year-long Khmer empire, the temple ruins have largely withstood decades of war, but are again at the center of a deadly border dispute with neighboring Thailand.

Thailand does not regard that map as valid, arguing that an earlier agreement showed the temple alongside a Thai mountain.

Thai troops occupied Preah Vihear in the 1950s, but were forced to leave after the World Court in 1962 accepted Cambodia's ownership claim. Mass demonstrations in Thailand followed the ruling.

Preah Vihear's cliff top position gives it a defensive military advantage, and it is reportedly the last place in Cambodia to have fallen to Khmer Rouge forces in 1975 as they swept through the country, emptying cities to create their vision of an agrarian utopia.

In 1979, Thai officials forced some 40,000 Cambodian refugees fleeing civil war and the Khmer Rouge back into their country over the heavily-mined Preah Vihear area, causing an unknown number to die.

Preah Vihear temple was also the scene of the final surrender of several hundred remaining Khmer Rouge guerrilla forces in 1998.

The temple issue lay dormant for years until Cambodia managed to get Preah Vihear listed as a U.N. World Heritage site in July 2008, reigniting nationalist fervor on both sides.

Each side claims ownership of a 4.6-square-kilometer (1.8-square-mile) area surrounding the ancient temple. Its main entrance lies in Thailand.

UNESCO deemed the site exceptional for its location on a plateau with sheer cliffs overlooking a vast plain and mountain range, its rare architecture and the religious function of the temple, and its carved stone ornamentation.

Since the World Heritage listing, both sides have engaged in occasional, sometimes deadly border clashes though not as heavy or prolonged as the current bout of violence.

In 2010, Cambodia built a new road to Preah Vihear, improving access to the crumbling but picturesque structure that Phnom Penh hopes to turn into a major tourist attraction.

The road also makes it easier for Phnom Penh to send troops and weapons to the border when tensions boil over.

Cambodia has accused Thailand of damaging the ancient stone temple in the latest unrest. Local sources have reported seeing shells scattered around the grounds and lodged inside temple walls.