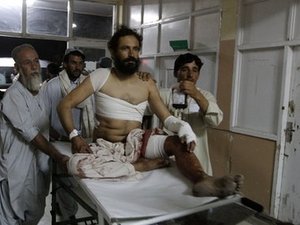 An outspoken anti-Taliban governor and 14 other people were killed Friday when a massive blast tore through a mosque in northern Afghanistan, a police commander told AFP.

A government spokesman said the explosion was caused by a planted bomb in Taluqan, the capital of Takhar province.

"There was a blast in the mosque. The governor, the imam, altogether 15 people have been killed," provincial police chief Shah Jahan Noori told AFP.

Mohammad Omar was governor of the neighboring province of Kunduz, one of the parts of northern Afghanistan most troubled by Taliban insurgents.

Although there was no immediate claim of responsibility for the attack, suspicion quickly fell on Islamist groups bitterly opposed to the Western-backed Afghan government.

Omar, who came from Takhar, repeatedly warned in public that the Taliban and Al-Qaida were expanding in Kunduz and had called for security reinforcements.

"A number of our countrymen have been killed and injured. The governor of Kunduz, Mr Mohammad Omar, was unfortunately among the dead," provincial spokesman Sayed Mohammad Tawhidi told AFP, unable to give an exact death toll.

Violence has increased in recent years in the North, which was once considered relatively peaceful compared to Taliban flashpoints in the east and south of the country.

More than 152,000 U.S.-led foreign troops are deployed in Afghanistan, focused primarily on the south, in a bid to reverse the nine-year Taliban insurrection and shore up the government of President Hamid Karzai.

Karzai on Thursday inaugurated a peace council charged with brokering an end to the war, amid mounting reports of secret peace talks.

The Taliban has said publicly it will not enter into dialogue with the government until all foreign troops leave the country and on Thursday -- the ninth anniversary of the conflict -- announced its jihad was as strong as ever.

In Washington, a new Senate report said U.S. funds for private security contractors have flowed to warlords and Taliban insurgents, undermining the war effort and fueling corruption in Afghanistan.

An investigation by the Senate Armed Services Committee found that the government had failed to vet or manage those hired to provide security under contracts worth billions of dollars, with disastrous results.

The Afghan government has condemned the role of private security contractors and this week formally banned eight foreign firms, including the controversial company formerly called Blackwater.(AFP)