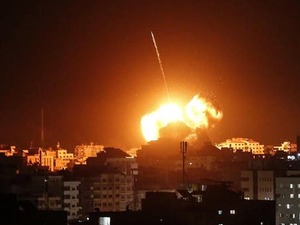 Israel's military on Saturday said it had conducted airstrikes against targets in the Gaza Strip following a rocket attack from the Palestinian enclave, in the second such exchange in as many days.

The strikes came hours after militants in the Gaza Strip fired a projectile that hit southern Israel on Friday night.

A statement from the military said sirens sounded in two communities near Gaza, with a spokesperson telling AFP that "the projectile landed in open areas in Israeli territory", with no reports of injuries or damage.

No militant group in Gaza took responsibility for the attack.

On Thursday, Palestinians fired a rocket at southern Israel, after which the IDF struck "Hamas terror targets" in Gaza, causing no casualties.

Israel imposed a blockade of Gaza's maritime and land border after the militant organisation Hamas seized control in 2007.

Hamas and Israel have since fought three wars.

A fragile truce has endured in recent years despite occasional flareups, with Palestinians firing rockets at Israel and the Jewish state responding with airstrikes on the coastal enclave.

Israel AND EGYPT imposed a blockade of Gaza's maritime and land border after the militant organisation Hamas seized control in 2007.

Why is it that AFP always managesd to "forget" that?