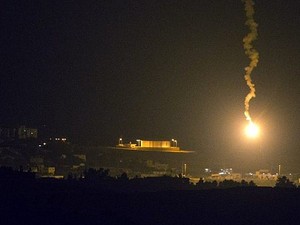 Israeli warplanes struck the Gaza Strip early Saturday after repeated salvos of rocket fire into Israel followed a second night of clashes between Palestinians and police in Israeli-annexed east Jerusalem.

Thirty-six rockets were launched, the Israeli army said, the most in a single night this year, after Gaza's Islamist rulers Hamas voiced support for the east Jerusalem protests, which were fuelled by a Thursday march by far-right Jews.

Washington said it was "deeply concerned" by the escalating violence, while the United Nations and the European Union appealed for restraint.

The United States, which has taken a more even-handed approach to the Israeli-Palestinian conflict since President Joe Biden took office in January urged "calm and unity".

Tensions have been running high in east Jerusalem over a ban on gatherings, and a series of videos posted online showing young Arabs attacking ultra-Orthodox Jews, and Jewish extremists taking to the streets to bully Arabs.

On Thursday, at least 125 people were injured when Palestinian protesters, angered by chants of "death to Arabs" from far-right Jewish demonstrators, clashed repeatedly with police.

Skirmishes broke out again on Friday when tens of thousands of Muslim worshippers left the city's revered Al-Aqsa mosque compound after night prayers and found themselves confronted by dozens of armed police, some on horseback.

Hundreds of Palestinians also gathered at the Qalandiya checkpoint between Jerusalem and the occupied West Bank, police said.

In the West Bank town of Bethlehem, Palestinians threw stones and petrol bombs towards the tomb of biblical matriarch Rachel, a shrine venerated by Jews and Muslims.

There have been nightly disturbances in east Jerusalem since the start of Ramadan on April 13, amid Palestinian anger over police blocking off access to the promenade around the walls of the Old City, a popular gathering place after the end of the daytime Ramadan fast.

Thursday's march into the heart of Arab east Jerusalem by hundreds of supporters of far-right Jewish nationalist group Lehava added fuel to the fire.

Jerusalem mayor Moshe Lion told public radio he was in talks with Palestinian community leaders in east Jerusalem "to end this pointless violence".

Lion said he had tried to cancel the Lehava march, but police told him it was legal and noted that "dozens" of Jews who attacked Arabs had been arrested in the past two weeks.

The office of Palestinian president Mahmud Abbas condemned "the growing incitement by extremist far-right Israeli settler groups advocating for the killing of Arabs".

In a statement on the Palestinians' official Wafa news agency, it urged the international community to intervene to protect Palestinians.

Jordanian Foreign Minister Ayman Safadi condemned "racist attacks" by Israelis against Palestinians in east Jerusalem and called for "international action to protect them".  "Jerusalem is a red line and touching it, is playing with fire," he warned.

"The spark you light today will be the wick of the explosion to come in the face of the enemy," it said in a statement.

An alliance of Palestinian militant groups, including Hamas and its smaller ally Islamic Jihad, issued a statement warning we "cannot remain silent" in the face of the violence.

Militants in Gaza fired a first salvo of three rockets at Israel shortly before midnight (2100 GMT) Friday, the military said.

The Israeli army said later that all 36 rockets fired were intercepted or hit open ground.

Israeli tanks shelled Gaza in response but the reprisals were met with a new volley of a dozen rockets, prompting the launch of air strikes against suspected launch sites operated by Hamas, it added.

"Fighter jets and attack helicopters struck a number of Hamas military targets in the Gaza Strip," including underground infrastructure and rocket launchers, it said.

It looks as if Hamas is really looking for trouble.
Let them not say that when it comes, they were not warned.
However, everyone knows that talking to them is like talking to a stone wall.
Unfortunately, once again, it is the innocent civilians who will suffer most.

How exactly do you respond to a Hamas missile firing site set up in the grounds of a school or hospital without hurting innocent civilians?

Israelis have no business in East Jerusalem, the extremists walk in the Palestinian streets chanting death to Arabs seeking trouble. I always wonder, if they’re referring to Arab Muslims, Arab Christians or Arab Jews unless it’s the Arab atheists?

Question : If Mohammed rose to the Heavens on Buraq from what is now called Haram as-Sharif, what was on that space before that event and before Al-Aksa was built?
Answer : It was the site of the Jewish Second Temple, the Wailing (Western) Wall being the remaining part of it. So, how can you say that Jews have no business in East Jerusalem, they were there at least 2,000 years before that event.

Dimdim, you’re getting mixed up with Jews and Israelis . They certainly have no business chanting in the streets “death to Arabs” because they are dimdims as well. You know very well that Palestinians are ethnically Arabs, they’re simply Arabs in culture like all in the Near East. The Jews from Lebanon who still have their properties in their names across Lebanon are Arabs as well, like it or not.