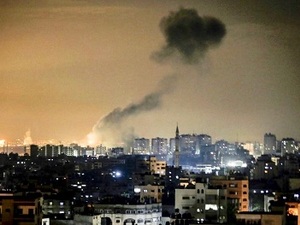 Nine children were among those killed in the blockaded Gaza Strip that is controlled by Hamas and 125 people there were wounded, local health authorities said.

Hamas's armed wing Qassem Brigades had vowed to turn the town "to hell" and rained down an intense volley, claiming to have fired 137 rockets towards Ashkelon and nearby Ashdod within just five minutes.

Loud booms again rocked the town on Tuesday, where a rocket had ripped a gaping hole into the side of an apartment block, an AFP reporter said.

More than 300 rockets have been fired by Palestinian militants towards Israel since Monday, with over 90 percent intercepted by the Iron Dome missile defense system, army spokesman Jonathan Conricus said earlier.

Israel fighter jets and attack helicopters have carried out more than 130 strikes on military targets in the enclave, said Conricus.

They have killed 15 Hamas commanders, he added, while the group Islamic Jihad confirmed two of its senior figures were also killed.

Conricus said Israel had no confirmation its strikes had impacted Gaza civilians, or whether the casualties there were caused by Palestinian rockets misfiring.

Tensions in Jerusalem have flared into the city's worst disturbances since 2017 in the days since Israeli riot police clashed with large crowds of Palestinians on the last Friday of the Muslim holy fasting month of Ramadan.

Nightly unrest since then at the Al-Aqsa compound in annexed east Jerusalem has left more than 700 Palestinians wounded, drawing international calls for de-escalation and sharp rebukes from across the Muslim world.

US Secretary of State Antony Blinken said "all sides need to de-escalate, reduce tensions, take practical steps to calm things down". He strongly condemned the rocket attacks by Hamas, saying they "need to stop immediately".

Diplomatic sources told AFP that Egypt and Qatar, who have mediated past Israeli-Hamas conflicts, were attempting to calm tensions.

Hamas had Monday warned Israel to withdraw all its forces from the mosque compound and the east Jerusalem district of Sheikh Jarrah, where looming evictions of Palestinian families have fueled angry protests.

Sirens wailed across Jerusalem just after the 1500 GMT deadline set by Hamas as people in the city, including lawmakers in the Knesset legislature, fled to bunkers for the first time since the 2014 Gaza conflict.

Prime Minister Benjamin Netanyahu said Hamas had "crossed a red line" by targeting Jerusalem and vowed that the Jewish state would "respond with force".

Hamas' Qassam Brigades said "this is a message that the enemy must understand well: if you respond we will respond, and if you escalate we will escalate".

Several properties in Israel have been damaged by rockets, including the apartment in the southern city of Ashkelon, and a house in Beit Nekofa, west of central Jerusalem.

An Israeli Arab died from gunshot wounds in clashes with Israeli Jews in the central city of Lod, police said Monday, without providing details.

In Monday evening's Jerusalem clashes -- as during the previous nights since Friday -- Palestinians hurled rocks at Israeli officers in riot gear who fired rubber bullets, stun grenades and tear gas.

"They shot everyone, young and old people," claimed Palestinian man Siraj, 24, about Israeli security forces in an earlier confrontation in which he suffered a spleen injury from a rubber bullet.

The Israeli police did not respond to specific allegations, but told AFP: "We will not allow disturbance of order while harming the fabric of life, inciting to harm police forces and violence against police officers and civilians."

Police commissioner Kobi Shabtai told Israeli N12 TV on Monday that in Jerusalem in recent days "we showed too much restraint. We are at the stage of taking off the gloves."

I hope that you are not trying to complain that Israel is retailiating to Hamas attacks on citizen in their homes in towns and villages around the Gaza Strip.

Pippo, it’s a disproportionate use of force. You know… Tian'anmen style. Do you recall how the communists sent tanks against college kids. Well this is the same. The West Bank, East Jerusalem and Gaza are part of the Palestinian state, like it or not. The Israeli court has no business in East Jerusalem, any verdict it issues is illegal. Sheikh Jarrah was Saladin’s doctor, it’s historically non Jewish. The Jerusalem of 2000 years ago was made of 10 streets, everything else was built by the Jews who never left who later converted to Christianity then Islam for most.

Just remember one simple fact. The Arabs/Palestinians could have had their own independence state after the United Nations vote on 29th November 1947, but they refused to accept it.

Shooting rockets on civilians is a war crime.

Isn't it now the appropriate time to Liberate Palestine/Jerusalem as Nassrallah has been promising?

It is certainly time to liberate Palestine...........from the dictator Abbas who has refused to hold elections for over 16 years and from the Henia the archi-terrorist whose Hamas group has made his fellow Gazans suffer for over 15 years.

Israel is a terrorist entity not a state, Palestinians are trying to liberate the occupied land.