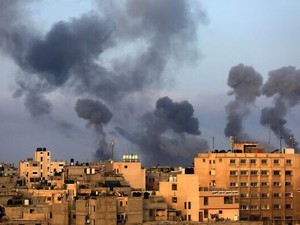 Heavy exchanges of rocket fire and air strikes, and rioting in mixed Jewish-Arab towns, fueled fears Wednesday that deadly violence between Israel and Palestinians could spiral into "full-scale war."

"This is just the beginning," warned Prime Minister Benjamin Netanyahu. "We'll deliver them blows they haven't dreamt of."

Gaza militants have launched more than 1,000 rockets since Monday, said Israel's army, which has carried out hundreds of air strikes on Islamist groups in the crowded coastal enclave of Gaza.

The most intense hostilities in seven years have killed at least 56 people in Gaza, including 14 children, and six in Israel, including an Israeli soldier and one Indian national, since Monday.

Three Palestinians were killed in West Bank clashes. And at least 230 Palestinians and 100 Israelis have been wounded.

The bloodshed was triggered by weekend unrest at Jerusalem's Al-Aqsa mosque compound, which is sacred to both Muslims and Jews.

The U.N. Security Council held another emergency meeting without agreeing on a joint statement due to opposition from the United States, Israel's ally.

Netanyahu declared a state of emergency in the mixed Jewish-Arab Israeli city of Lod, where police said "wide-scale riots erupted among some of the Arab residents", and authorities later imposed an overnight curfew there.

There were fears of widening civil unrest as protesters waving Palestinian flags burnt cars and properties, including a synagogue, clashed with Israeli police and attacked Jewish motorists in several Jewish-Arab towns.

Israel's President Reuven Rivlin, in unusually strong language, denounced what he described as a "pogrom" in which "an incited and bloodthirsty Arab mob" had injured people and attacked sacred Jewish spaces.

Rivlin said Israelis needed "to be ready and armed, strong and determined, prepared to defend our home."

Of these, 850 have hit in Israel or been intercepted by Israel's Iron Dome air defense system, while the rest have crashed inside Gaza, the army said.

Israel has launched hundreds of air strikes on Gaza, the Israeli-blockaded strip of two million people that Hamas controls, targeting what the army described as "terror" sites.

Hamas said several of its top commanders were killed in Israeli strikes, including its military chief in Gaza City, Bassem Issa. Israel's internal security agency, the Shin Bet, also identified three other top Hamas militants who it said were killed.

Its leader Ismail Haniyeh threatened to step up attacks, warning that "if Israel wants to escalate, we are ready for it."

British Prime Minister Boris Johnson urged both sides to "step back from the brink."

Secretary of State Antony Blinken said a U.S. envoy would travel to meet Israeli and Palestinian leaders to seek "a de-escalation of violence."

In Gaza City, people sifted through debris after an Israeli air strike destroyed a 12-storey building that Hamas had been a residential building. It was also known to house the offices of several Hamas officials.

Five members of a single family were killed by an Israeli strike in northern Gaza Tuesday, including young brothers Ibrahim and Marwan, who were filling sacks of straw at the time.

"We were laughing and having fun when suddenly they began to bomb us. Everything around us caught fire," their cousin, also called Ibrahim, told AFP.

"I saw my cousins set alight and torn to pieces," said the 14-year-old, breaking down in tears.

In Israel's central city of Lod, a man and a girl were killed Wednesday by rocket fire from Gaza. Israel identified one of the dead as 16-year-old Nadin Awad, an Arab Israeli.

Her cousin, Ahmad Ismail, told public broadcaster Kan that he was near Nadin when she was killed alongside her father Khalil Awad, 52.

"I was at home, we heard the noise of the rocket," said Ismail. "It happened so quickly. Even if we had wanted to run somewhere, we don't have a safe room."

An Israeli woman was killed when rockets hit Rishon Letzion near Tel Aviv. In Ashkelon, a town near Gaza which Hamas threatened to turn into "hell", rockets fired by militants killed two women Tuesday.

The crisis flared last Friday when weeks of tensions boiled over and Israeli riot police clashed with crowds of Palestinians at Jerusalem's Al-Aqsa mosque.

Nightly disturbances have since flared in east Jerusalem, leaving more than 900 Palestinians injured, according to the Palestinian Red Crescent.

The unrest has been driven by anger over the looming evictions of Palestinian families from the Jerusalem neighborhood of Sheikh Jarrah.

Large protests have been held in solidarity with Palestinians around the world, including in Britain and South Africa as well as in Muslim-majority countries including Kuwait, Lebanon, Oman, Pakistan, Tunisia and Turkey.

Israel is a terrorist entity not a state

Without going too deep into history, remember that just one year before your name, on 29th November 1947 to be exact, the UN voted to establish 2 independent states in the territory of the British Mandate. It is not Israels' fault that the Arab States refused to accept this.

But it is Israel fault that it continues to commit war crimes and crimes against humanity including the expulsion and dispossesion of millions of Palestinians from their homeland. Over 80 percent of Gazans are refugees from what is now Israel!

Non Jewish citizens are being lynched tonight across cities, many businesses getting destroyed KristallNacht 2021 .

It’s not my usual vocabulary, but the Israelis are behaving like the Nazis.

Interesting that the international community does not consider over 1000 rockets launched and hundreds of airstrikes in two days to be a "full scale war." Wonder what it takes.

Mr Arturo, how many bombs and missiles has Israel fired in the past 48 hours? You do not know because there’s zero transparency.

That’s what I thought….