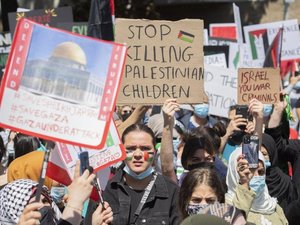 Canadian Prime Minister Justin Trudeau on Sunday condemned the violence and "despicable rhetoric" that marked several weekend protests throughout the country, after clashes between pro-Israel and pro-Palestinian protesters in Montreal.

The worst violence in years, sparked by unrest in Jerusalem, is raging between the Jewish state and Islamist militants.

Israeli strikes killed 42 Palestinians in the Gaza Strip on Sunday, the worst daily toll in almost a week of deadly clashes.

Speaking after protests in Montreal, Trudeau condemned what he said was "despicable rhetoric and violence we saw on display in some protests this weekend".

While insisting on the "right to assemble peacefully and express themselves freely in Canada," Trudeau stressed in a tweet that there was no tolerance for "antisemitism, Islamophobia, or hate of any kind."

Several hundred demonstrators, draped in Israeli flags, had gathered in a central Montreal square to express solidarity with the Jewish state.

Although the protest started peacefully, tensions ratcheted up with the arrival of pro-Palestinian demonstrators and clashes soon broke out.

The SPVM, Montreal's city police force, declared the protests illegal, and squads of riot police intervened, using tear gas to separate and disperse the two groups, according to an AFP journalist at the scene.

The police spent much of the afternoon in pursuit of the pro-Palestinian protesters, who spread out and regrouped in commercial streets in the city center.

Following the clashes, Montreal Mayor Valerie Plante said on Twitter that "protesting is a right," but that "intolerance, violence and anti-Semitism have no place here."

"Montreal is a city of peace," she said.

Several thousand pro-Palestinian demonstrators had gathered Saturday in central Montreal to denounce what they said were Israeli repression and "war crimes" in Gaza.

"Terrorist Israel," some protesters chanted, while others held up a banner that read, "Stop the genocide of Palestinian children."