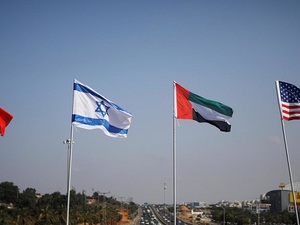 But the conversations were "open" and "everybody was very moderate and understanding", Fleur Hassan-Nahoum said.

Speaking on the sidelines of a bilateral investment conference in Dubai, Hassan-Nahoum, co-founder of the UAE-Israel Business Council, also expressed hope that trade between the two countries would exceed the billion-dollar mark in the coming year.

The UAE in 2020 became only the third Arab country to establish full ties with Israel, under a Washington-backed deal condemned by the Palestinians.

The two sides have since announced a string of deals on investment, business cooperation and visa-free travel.

But last month, clashes in Jerusalem sparked an 11-day flare-up that saw Israeli jets pound the Gaza Strip, while Palestinian militants there fired thousands of rockets into Israel.

"It wasn't easy," Hassan-Nahoum said of the atmosphere between Israeli business leaders and their UAE counterparts.

"I am involved in a lot of different forums of Israelis and Emiratis and there were some uncomfortable conversations, but it was important that we had those conversations," she said.

"We had very open conversations on areas of disagreements... people had a lot of questions about the (Israeli) military campaign" which involved air and mortar strikes on Gaza, she added.

"We are definitely at the beginning of this relationship... one of the most important things about having a long-lasting relationship is to build trust," Hassan-Nahoum said.

"After many years of not having this friendship I think it takes time."

The main questions centred on the "proportionality" of Israel's response to rocket attacks from Gaza, but also "about Sheikh Jarrah in Jerusalem, about what happened in Al-Aqsa mosque," she said.

It also followed weeks of clashes between Israeli police and Palestinian protestors in the Sheikh Jarrah neighbourhood against the planned expulsion of Palestinians from their homes in favour of Jewish settlers.

Rockets and other fire from Gaza have killed 13 people in Israel, including a child and an Arab-Israeli teenager, an Israeli soldier, one Indian, and two Thai nationals, medics and the military say. Some 357 people in Israel were wounded.

An Egyptian-mediated truce has so far held.

The conflict put a pause on months of warming relations, prompting the UAE to publicly criticise Israel over its actions, while some Emirati social media users called for a boycott.

But Hassan-Nahoum vowed to press ahead with ties that have already produced trade worth "about half a billion dollars so far".

"A few months ago it was like 300 million and I think that (there) has been a real push in the last few months," she said, noting that this figure "would have been much higher" in the absence of the Covid-19 pandemic.

"I think it would have been already in the billion dollars mark -- but we will get there, inshallah, next year," she said.

This week's trade fair sought to pave the way for cooperation deals in the fields of health, renewable energy and technology.

UAE officials did not immediately respond to a request for comment.

In a further sign that the commercial relationship remains broadly on track, Israel and the UAE this week also agreed a bilateral tax treaty.

But a visit to Dubai by Israeli Tourism Minister Orit Farkash-Hacohen to attend a travel industry forum in mid-May was cancelled.

The UAE was the third Arab country to normalise ties with Israel, following Egypt in 1979 and Jordan in 1994. Bahrain, Morocco and Sudan have since followed suit.

The Abraham Accords swept away decades of consensus that there should be no relations with Israel until it makes peace with the Palestinians.

Palestinians have condemned the normalisation agreements as "a stab in the back".