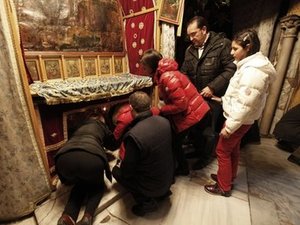 The Palestinians on Monday made a formal bid to have Bethlehem, the birthplace of Jesus Christ, added to UNESCO's list of World Heritage sites.

"We are very proud to announce that we have submitted the nomination file of Bethlehem: birthplace of Jesus -- Church of the Nativity and the Pilgrimage Route ... to the World Heritage Center," tourism minister Khulud Daibes told reporters.

The addition of the West Bank town to the UNESCO list should have been almost automatic and accomplished a long time ago, but like most issues in the Holy Land, it has become entangled in the Israeli-Palestinian conflict.

And the Palestinians are hoping that getting the U.N. Educational, Scientific and Cultural Organization to recognize Bethlehem as a part of Palestinian cultural heritage will give impetus their struggle to establish a state.

"This timing is crucial for us, it is part and parcel of our plan to end the (Israeli) occupation and build the institutions of the state of Palestine," Daibes said.

In the absence of constructive peace talks with Israel, Palestinian Prime Minister Salam Fayyad has been leading a move to build the institutions for a de-facto state.

They feel they have a strong case for Bethlehem's recognition when the U.N. committee meets to decide on the nominations in July 2012.

"Where Jesus Christ was born is one of the most important cultural places in the world. It is from here that the message of peace and light was brought to the world by the Prince of Peace," said Bethlehem mayor Victor Batarseh.