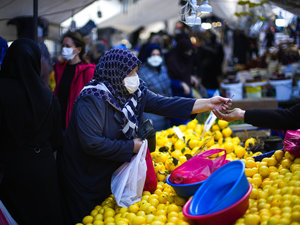 The bank's monetary committee announced it was reducing the policy rate to 15% from 16%, even as inflation runs at close to 20%. It was the bank's third interest rate cut in as many months.

The rate cuts have raised concerns over the bank's independence from Erdogan, who, contrary to traditional economic theory, argues that steep interest rates cause inflation and has declared himself an "enemy" of high borrowing costs.

The lira dropped to about 10.89 against the U.S. dollar following the bank's announcement — down 2.46% from Wednesday's close — continuing a long run of losses. The lira has lost more than 30% of its value since the start of the year, severely eroding Turkish consumers' purchasing power.

Erdogan told ruling party lawmakers Wednesday in Parliament that he would continue to fight high interest rates as long as he remains in office. The Turkish leader, who has grown increasingly authoritarian, also suggested he would part ways with any official who defends high interest rates.

"Interest rate is the cause, inflation is the consequence," Erdogan said. "We will remove the high interest burden from the back of our people."

The leaders of two opposition parties have accused Erdogan of severe mismanagement of the economy and have called for early general elections. Erdogan insists that elections will be held in 2023 as scheduled.

The president has fired three Central Bank governors since 2019 amid concerns over the bank's independence.