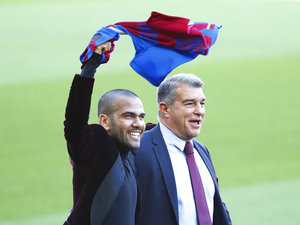 When Xavi Hernández played for Barcelona, a game against Espanyol was normally an easy win.

Now, Espanyol can ruin the former midfielder's return to Camp Nou as coach of his boyhood club.

Xavi has had two weeks during an international break to settle back in at Barcelona, where he played for 17 seasons and helped the Catalan club become the envy of world soccer.

The Barcelona he left in 2015 is not the Barcelona he has under his command. Gone are Lionel Messi and other top players because of the club's financial difficulties, and the team that rarely went a season without at least one major title is now realistically looking at a top-four finish in Spain as a goal to ensure its presence in the Champions League.

Espanyol travels across the city on Saturday with hopes of getting a victory it has been waiting for since 2009. Since then, it has gone 22 league matches against Barcelona without a win.

The city's "other" club is in 11th place but level on points with Barcelona, and nothing would be better for a team that spent last season in the second division than leapfrogging its biggest rival with a win at its stadium.

"Saturday's match will be one of the most difficult, if not the most difficult, matches that we have had this season," said Espanyol winger Aleix Vidal, a former Barcelona player. "We have to play a perfect game and hope that they don't have their day."

Espanyol will be led by striker Raúl de Tomás, who last week made his debut for Spain and started both of the national team's decisive World Cup qualifiers to help it secure a spot in next year's tournament in Qatar.

De Tomás has scored seven league goals this season, including the opener in Espanyol's 2-1 win over Real Madrid last month. Only Madrid forward Karim Benzema has scored more in the league with 10.

Xavi takes over a team that under Ronald Koeman and caretaker coach Sergi Barjuan only managed to win four of 12 league games this season while losing to Real Madrid and Atlético Madrid.

The former midfielder will now give orders to several of his former teammates. Sergio Busquets, Gerard Pique, Jordi Alba, Sergi Roberto and Marc-Andre ter Stegen all played with Xavi.

Dani Alves joined that group this week when the 38-year-old free agent signed a contract to finish out the season with the team that he and Xavi helped forge into a repeat champion.

Alves said after his presentation in front of 10,000 fans on Wednesday that he had not come back just to be a good sport in the changing room. He wants to fight for playing time with youngster Sergiño Dest and Óscar Mingueza at right back.

"I have less hair now, but the same desire to play," Alves said. "I want to bring some joy and excitement to the team. Recently the team has been through a rough spell and it is time to change that."

Real Sociedad hosts Valencia on Sunday aiming to extend a 12-game unbeaten streak in the league that started after it lost its season opener. Sociedad is hoping striker Mikel Oyarzabal can return soon after more than a month sidelined with a leg injury.

Madrid and Sevilla are both one point behind Sociedad and with an extra game each to play.