Bayern Player Kimmich Back in Quarantine amid Vaccine Debate 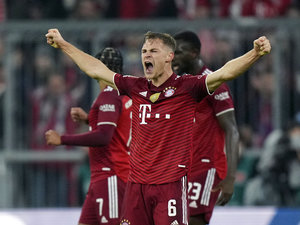 The German club said Friday that the unvaccinated Kimmich would miss the team's game at Augsburg. Although Bayern didn't give any more details, the 26-year-old Kimmich is also a doubt for the team's Champions League game at Dynamo Kyiv on Tuesday.

Bayern coach Julian Nagelsmann said Thursday that Kimmich missed training that day because he had contact with a person suspected of having the coronavirus.

Süle and Josip Stanišić, who tested positive for the virus after returning from international duty with Croatia, are also in quarantine. Stanišić was fully vaccinated and had also previously contracted COVID-19.

Kimmich previously caused a furor in Germany for voicing his reservations about getting vaccinated against the coronavirus. Vaccine opponents seized on his comments to further their cause, while medical experts expressed their dismay as the number of infections continued to climb.

Kimmich's reticence to get vaccinated means he faces a longer quarantine period than a fully vaccinated player.

Nagelsmann, who is vaccinated but recently missed four Bayern games because of his own coronavirus infection, refused to directly criticize Kimmich for his stance, despite it now affecting his availability for the team.

"I get on quite normally with them, they're not bad people for me," Nagelsmann said of the unvaccinated players.

"That is a fact," Nagelsmann said Thursday. "I think that the players who are not vaccinated understand that the risk of missing games or training sessions is much greater as an unvaccinated person than as a vaccinated person. I don't think I need to make that clear to a player. It's obvious."

Bayern state premier Markus Söder, who is a fan of the team, also appealed for unvaccinated players to get vaccinated.

"Any player who does not agree to go down this route will not be doing his club any favors, nor the sport, in the end," Söder said.

Lothar Wieler, the head of Germany's disease control agency, said the country is in a "nationwide state of emergency" because surging coronavirus infections have already overstretched some hospitals and intensive care wards. Infections topped 50,000 for the third straight day on Friday.