U.N. Says Generation of Children 'at Stake' in Lebanon Crisis 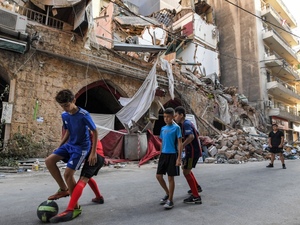 The U.N. children's agency Tuesday called on Lebanon to take urgent action to protect children after it documented a spike in child labor rates and food insecurity since April.

"Urgent action is needed to ensure no child goes hungry, becomes sick, or has to work rather than receive an education," said Yukie Mokuo, UNICEF representative in Lebanon.

"The staggering magnitude of the crisis must be a wake-up call," she said, quoted in a statement.

Lebanon is grappling with its worst-ever financial crisis, with nearly 80 percent of the population estimated to be living below the poverty line.

UNICEF in October followed up with the more than 800 families it had surveyed in April and found that since then living conditions had deteriorated dramatically.

"The future of an entire generation of children is at stake," it said in its latest report titled "Surviving without the basics".

The survey found 53 percent of families had at least one child who skipped a meal in October 2021, compared with 37 percent in April.

"The proportion of families... who sent children to work rose to 12 percent, from nine percent," UNICEF added.

It said almost 34 percent of children who required primary health care in October did not receive it, up from 28 percent in April.

"Life is very hard; it is becoming harder every day," Hanan, a 29-year-old mother, was quoted as saying by UNICEF.

"Today I sent my four children to school without food.

"I have suicidal thoughts and the only thing stopping me from doing this is my children. I feel so bad for them."

Amal, a 15-year-old who works as a fruit-picker in southern Lebanon, said she had to take up the job to support her family.

"Our parents need the money we earn. What would they do if we stopped working now?" UNICEF quoted her as saying.

"When I look to the future, I see life getting harder."