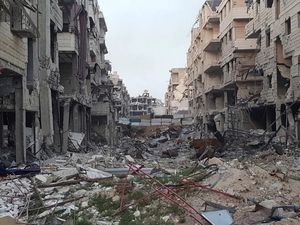 The official said that Syria's air defenses shot down most of the missiles, adding that in addition to the casualties there was also some material damage.

The Britain-based Syrian Observatory for Human Rights said the strikes killed four, including two who lost their lives when they were hit by parts of a Syrian surface-to-air missile that fell in the central city of Homs.

Israel has staged hundreds of strikes on targets inside government-controlled Syria over the years but rarely acknowledges or discusses such operations.

Israel has acknowledged, however, that it targets the bases of Iran-allied groups, such as Hizbullah that has fighters deployed in Syria. It says it attacks arms shipments believed to be bound for the groups.

Hizbullah is fighting on the side of Syrian President Bashar Assad's forces in the decade-old civil war.

Israel says Iranian presence on its northern frontier is a red line, justifying its strikes on facilities and weapons inside Syria.

I am sure nassrallah will now send his 100,000 shia terrorists to destroy Israel, or not?