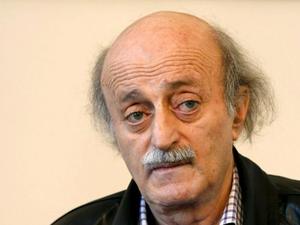 Progressive Socialist Party leader Walid Jumblat has said the principle of “managing or suspending the disagreements” with Hizbullah is still valid.

He told al-Joumhouria newspaper, in remarks published Wednesday, that “one has the right to raise his voice sometimes in order to express a position or a cry.”

Jumblat had said earlier this month that his “patience on Hizbullah is running out,” describing the fuel trucks that Hizbullah imported from Iran as “beggary” and accusing Hizbullah of “ruining the lives” of the Lebanese who work in the Gulf in connection with the diplomatic crisis with Saudi Arabia.

They’re war criminals who whenever stood in trial…. What else do you expect?

Precisely the reason for fundamental reason for our woes. No one has the right for Faustian deals with occupiers. Hizbollah, this criminal organization funded, armed and indoctrinated by Iran Revolutionary guards who are taking Iran hostage, are a million time worse than Vichy Government and the primary culprits in assassinating Lebanon best and freedom voices. Jumblatt, as Aoun, Bassil, Frangie, Berri, SSNP and Saad are committing acts of High Treason by accommodating an occupier and allowing Lebanon, our culture, democarcy and independence to be systematically destroyed in front of our eyes by the Basij, a foreign regiment of criminal Iranian Guards.