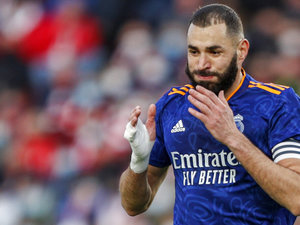 France and Real Madrid forward Karim Benzema was given a one-year suspended jail sentence and a fine of 75,000 euros ($84,000) Wednesday in a sex-tape case that rocked French soccer and put the talented striker's international career on hold for more than five years.

Benzema was found guilty of being involved in an attempt in 2015 to blackmail France teammate Mathieu Valbuena. In addition to the fine, Benzema was ordered to pay Valbuena 80,000 euros ($89,700) in damages.

Benzema's lawyers said he will appeal.

Benzema was charged with complicity in the blackmail attempt over a sex tape thought to have been stolen from Valbuena's mobile phone.

The Versailles court decision is unlikely to affect Benzema's immediate sporting future. The forward is regarded as one of the favorites to win the Ballon d'Or award on Nov. 29 in Paris following an impressive season with Madrid. French federation president Noel Le Great has already said Benzema would be allowed to keep playing with France even if found guilty.

Benzema, who denied wrongdoing, didn't attend the trial in Versailles last month and was absent for the verdict. The four other defendants were also found guilty on charges of attempted blackmail and did not appear at the court Wednesday.

"Benzema will come to explain himself before the court of appeal," said Antoine Vey, one of the player's lawyers. "He was absent from the trial for professional reasons, the fact that he was absent had an influence in the judgment. This conviction is unfounded."

Prosecutors had asked that Benzema be fined 75,000 euros, the maximum allowed on the charge, and be given a suspended 10-month jail term if found guilty.

The court gave a jail sentence of two years and six months to Mustapha Zouaoui, saying he masterminded the plot. Axel Angot, who first got hold of the sex tape in 2014, was handed two years in jail. Another of the convicted blackmailers, Younes Houass, received an 18-month suspended jail sentence and Benzema's longtime friend, Karim Zenati, was jailed for 15 months.

Both Angot and Zenati's sentences could still be adjusted.

After preliminary charges in November 2015, Benzema was dropped from France's national team by coach Didier Deschamps. That resulted in Benzema missing the 2016 European Championship, and also the 2018 World Cup which was won by France.

Deschamps recalled Benzema in May ahead of the delayed Euro 2020 tournament and has since fielded him regularly.

During the trial, Valbuena testified that Benzema spoke to him about the sex tape, telling him "there's a video, it's hot," when they were together at France's Clairefontaine training camp in October 2015. Benzema also said that he had a good friend who could help and "can solve your problem," Valbuena testified.

Although Benzema "never spoke to me about money," Valbuena said he understood that he would have to pay for the friend's assistance.

In a subsequent phone call wiretapped by police, Benzema talked with Zenati about the conversation Benzema had with Valbuena. Benzema and Zenati had known each other since childhood. When Zenati was released from prison in 2013, following robbery and drug convictions, Benzema hired him as an assistant.

In the wiretapped call, which was played in court, the pair chuckled about Benzema's talk with Valbuena. Benzema said that he had told Valbuena that "if you want the video to be destroyed," he should contact Zenati, without involving police, lawyers or others.

"I gave my word that there are no copies," Benzema said in the call.

Valbuena's lawyer, Didier Domat, said the ruling came as a relief for his client. Unlike his former teammate, Valbuena has not played for France since the scandal broke.

"He has suffered sports prejudices that are difficult to repair," Domat said. "We are satisfied that his status as a victim has been recognized."