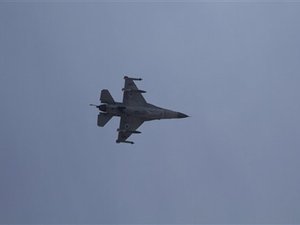 Israeli strikes targeting a part of Syria where fighters loyal to Lebanon's Hizbullah are based killed five people Wednesday, a war monitor said.

The Israeli missiles struck an area near three villages in the west of Homs province, said the Syrian Observatory for Human Rights, a Britain-based group with a wide network of sources on the ground.

Three Syrian soldiers as well as two Syrian militiamen affiliated with Hizbullah were killed in the early morning strikes, the monitoring organization said.

Syria's air defenses "repelled the aggression and shot down most" of the missiles, SANA said, quoting the same source.

The Israeli military, which rarely acknowledges individual strikes on Syria, declined to comment on "reports in the foreign media."

Israel has said repeatedly it will not allow neighboring Syria to become a launchpad for its foe Iran.

Since civil war broke out in Syria in 2011, Israel has carried out hundreds of air strikes on Syrian territory, targeting government positions as well as allied Iran-backed forces and Hizbullah fighters.

SANA had reported on November 8 that two Syrian soldiers were injured by Israeli missile strikes on areas in the center and the west of the country.

On October 30, five pro-Iranian militiamen were killed in an Israeli strike that destroyed Hizbullah and Iranian weapons and ammunition near the Syrian capital, the monitor said.

An Israeli strike in mid-October killed nine pro-government fighters near the T4 airbase east of Palmyra in central Syria, according to the same source.

I already have a problem with the headline. It should read “2 Pro-Hizbullah Terrorists Killed in Syria Airstrike”.

The civilized world acknowledged that hizbullah is a terrorist organization with international ramifications.

Chippin away, little by little, day by day...

The sooner the better. Pity the underground hider can't join them.