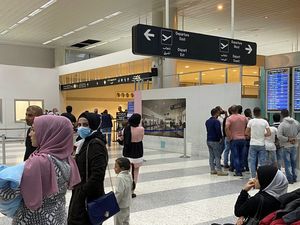 Lebanon's government on Thursday ordered travel agents to stop promoting Belarus as a destination in a bid to stem the flow of migrants attempting to enter the European Union.

The move came in a circular published issued by Tourism Minister Walid Nassar, who said it was aimed at preventing Beirut from being used as a departure point.

Thousands of migrants -- including from Lebanon, Syria and Iraq -- have been massing at Belarus' border with Poland, hoping to seek asylum in the EU.

The West accuses Belarus of creating the crisis by bringing in would-be migrants and taking them to the border with promises of an easy crossing into the bloc.

"Some of those nationals from Middle Eastern and African countries who are hoping to emigrate are using Rafik Hariri airport" in Beirut, Nassar said.

Belarus denies it engineered the crisis to use as leverage against Western sanctions but migrants have been caught in between, many left stranded in the cold, forested border area.

For holders of the citizenships most represented among the migrants, visas to Belarus have been easier to obtain than for most other countries that have land borders with the EU.

Airport authorities in Lebanon had already put a curb on some nationalities booking flights with Belavia, a Belarusian airline whose number of flights from Beirut had conspicuously increased recently.