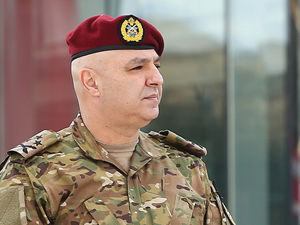 The U.S. and the West do not mind postponing the elections nor extending Parliament's term, on the condition that the legislature elect Army Commander General Joseph Aoun as president, diplomatic circles in Beirut reportedly said.

Al-Liwaa newspaper observed for its part that there is regional, international and Arab consensus on Aoun, adding that France and the Vatican do not object to Aoun’s election as president.

Another Hezbollah tool for president.

True. We need busineepssmen who create jobs for president. Not army types, please....

Is anyone going to ask the people's opinion at some point?
Are we going to keep having stupid Generals that are NOT fit to run a country for Presidents?
Is being the General of the Army now a prerequisite for the chair?

The constitution does not allow the army commander to be prez, but who cares.

The alternatives would be Bassil or Frangieh… Well….

I am sorry, but Bassil is not an option. He is under sanctions.
It is not fit.

From Fouad Chehab, to Emile Lahhoud, to Michel Suleiman, to Michel Aoun, ENOUGH! Let the people have their say on who is the next president