Pope Meets Miqati at Vatican, Urges Lebanese to Unite for Their Country 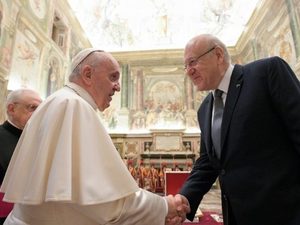 Pope Francis urged Thursday all Lebanese to cooperate in order to save their country and give it back its role “as a model for dialogue and convergence between East and West.”

The pope said after meeting with Prime Minister Najib Miqati at the Vatican that he will pray for Lebanon.

“We are in dire need for prayers and for friends’ support in these hard times,” Miqati said for his part.

He added that “the Pope will make every effort in all international forums” to help Lebanon overcome its hardship and regain peace and stability.

“The (civil) war has taught us how to preserve our coexistence despite the challenges,” Miqati said.

In Miqati's meeting with the Vatican secretary of state, the talks concerned the hope that "justice, necessary reforms and the support of the international community help to resolve the problems," a Vatican statement said.

Miqati's government, which was formed on Sept. 10, has been paralyzed for weeks — unable to meet because of deep divisions over the investigation into the port blast and a diplomatic dispute with the Gulf Arab states.

Meanwhile, the Lebanese pound has continued to slide, hitting new lows this week amid staggering inflation and soaring poverty. Lebanon's spiraling financial crisis started in late 2019 and has rapidly worsened, compounded by the port blast and pandemic.

Miqati's government hasn't met since mid-October after Hizbullah-backed ministers called for the removal of the lead investigator into the blast and threatened to boycott Cabinet meetings until their demands are met, leading to the current paralysis.