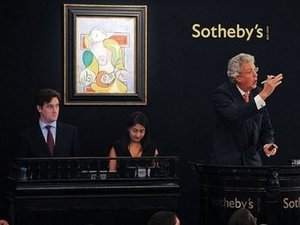 A celebrated masterpiece by Pablo Picasso sold Tuesday at Sotheby's auction house in London for 25.2 million pounds, more than double its pre-auction valuation.

"La Lecture" is a work from the Spanish painter's "annus mirabilis," 1932, and depicts the artist's famous muse, Marie-Therese Walter. The painting was sold for the equivalent of 40.7 million dollars or 29.7 million Euros.

Tuesday's sale -- which also included works by Wassily Kandinsky, Rene Magritte and Edouard Manet -- fetched a total of 68.8 million pounds, according to the auction house's website.

Seven bidders vied for the coveted Picasso work, the hammer eventually coming down after six minutes of bidding to finalize the sale to an anonymous phone buyer.

Picasso met Walter when he was 45 and she was 17 outside the Galeries Lafayette in Paris in 1927, while he was still married to Olga Khoklova.

The second most expensive work at the auction was a bronze sculpture by Italian artist Marino Marini, "L'Idea del Cavaliere", which sold for 4.1 million pounds.

Ten lots failed to reach their reserve price, including a painting and a sculpture by Swiss artist Alberto Giacometti, which were both expected to reach over three million pounds.

Rival auction house Christie's was Wednesday to hold its own Impressionist and Modern Art sale in London, the prize piece being Paul Gauguin's "Nature morte a "L'Esperance," which is expected to sell for around 10 million pounds.