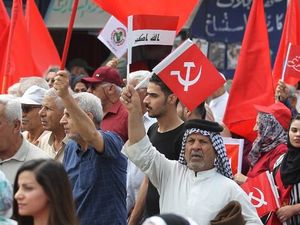 The Iraqi Communist Party may have seen its red star fade but it hopes to come back by advocating what remain radical ideas in the country: women's rights and secular politics.

For now the movement with the hammer-and-sickle banner and the peace dove logo -- Iraq's oldest active political party, founded in 1934 -- claims only a few thousand members and no deputies in parliament.

The party, which on Sunday marks the May 1 Labor Day, boycotted last October's election to protest against the country's "corrupt ethno-sectarian power-sharing system that was installed after the U.S. war and occupation of the country in 2003".

Iraq's other parties represent religious and ethnic groups: Shiite Muslims, who by convention hold the prime ministership, Sunnis who take the parliamentary speaker's post, and Kurds who control the presidency.

The ICP, by contrast, advocates a political system independent of religion -- a remote prospect for now in the country of 40 million where Christian and Turkmen minorities also have their own, small parties.

"The rhetoric around the separation of mosque and state in Iraq is still very weak," said political scientist Marsin Alshamary, with the Middle East Initiative project.

For now political power is concentrated in the majority Shiite camp, split between firebrand cleric Moqtada Sadr's bloc and a rival alliance of pro-Iran groups, the Coordination Framework.

"The religious parties that control the country make life hard for women and for young people who want freedom," said one ICP supporter, Zeinab Aziz, a 53-year-old civil servant.

"The Communist Party is the first to defend women."

The ICP may be on the margins now, with only two MPs in the previous parliament, but in Iraq's turbulent history, it has had its moments of glory.

In the 1940s and 1950s, it "promoted social justice, anti-imperialism and gave a voice to the underprivileged," said Tareq Ismael, political scientist at the Canadian University of Calgary.

After the revolution of July 14, 1958 which overthrew the monarchy, Communist support for Abdelkarim Qassem, the country's first president, was decisive.

The ICP suffered repression in the 1970s under the ruling Baath party of Saddam Hussein, but was reborn in the wake of the US-led invasion and the fall of the dictator.

For now it wants to promote ideas rather than govern, mainly social justice and women's rights -- a challenge in a country where patriarchal and tribal traditions remain strong.

A recent UN report found that "significant barriers persist in Iraq" to gender equality, and the World Bank says women make up only 13 percent of the workforce, one of the lowest rates in the world.

The Communists want to change that, vowing in a statement "to promote women's participation and economic empowerment, ensuring their safety and providing protection for them within the family and society".

"The role of women is difficult, but there is progress," said Fahmi. "We see young people who have a much more open attitude."

Progressive ideas around rights and social justice were picked up passionately by a youth-led protest movement that emerged in October 2019, venting their rage against Iraq's graft-tainted governing elite.

But the ICP failed to make itself heard strongly at the time, remaining mostly engaged with its traditional allies such as trade unions and student associations.

"In many ways, it represents the old guard of civil society," said Alshamary.

"And this is a lost opportunity for the ICP, which could easily capitalize on the anti-Islamist wave and position itself as the torchbearer of all that is liberal and secular."

One of the party's loyal supporters, Abdallah Ghaleb, was hopeful for a bright future for the ICP.

At 22, he said he calls himself a communist "because there is too much corruption and unemployment in Iraq. The Communist Party supports ordinary people."