Flowers in the rubble: Ukrainian woman sees a sliver of hope 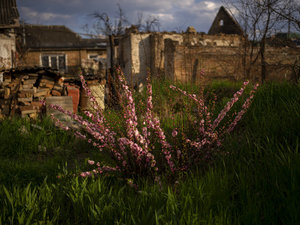 There are no walls any longer. The broad wooden roof beams lie splintered and scattered, and random pieces of clothing dangle from damaged water pipes. But among the rubble of what used to be her home, the house that her grandparents built, Anna Shevchenko sees a glimmer of hope.

There, among the twisted metal and broken bricks of her former life in Irpin, stood the slender stalk of one of her beloved lilies. A bit further, some roses had survived. A small bunch of daffodils and a tiny peony poked through the destruction, battered but not broken. And her tulips are starting to bloom.

"I saw a photo of the house," said Shevchenko, who had fled the town on the outskirts of Kyiv, the Ukrainian capital, nearly two weeks before the bombs rained down. "I tried to prepare myself to see it with my own eyes. And then the next moment — I looked and I saw the flowers."

A piece of concrete piping now serves as protection for the peony, which has sprouted new leaves. She pushed a giant piece of hard plastic off her gently blossoming peach tree and tenderly watered a single lily shoot peeping from beneath a slab of concrete. The orchids inside her home were long dead, but outside, her bright red tulips had escaped unscathed.

By the time the harsh Ukrainian winter began turning into spring, Shevchenko's family had already paid a heavy price in Russia's war against Ukraine. On the same day they lost their home, Shevchenko's father lost his leg to an explosion as he tried to flee Irpin. An active man in his early 60s who loved to cycle, he now barely leaves the apartment that Shevchenko's friends are letting the family stay in since he was released from the hospital.

When the family fled Irpin around March 10, Shevchenko said her father stayed behind, hoping to save his house.

"My grandparents built this house, brick by brick," the 35-year-old literature teacher explained.

As the shelling intensified and Russian troops, who once occupied parts of Irpin in a failed attempt to advance on Kyiv, came ever closer to their neighborhood, Shevchenko's father realized he had to leave.

He hasn't described how he was wounded to his daughter yet, she said, but she knows he was hit by an explosion as he sat in a car trying to evacuate. He lost his right leg above the knee. The part the doctors did save was badly broken and is still held together by an external metal rod screwed into his thigh.

He hasn't yet seen what became of his home — or his bike, which lies smashed under piles of bricks in what used to be his front garden.

Her grandparents built one part of the house for her mother, then added on another for her uncle, which Shevchenko had been living in. While that part is damaged, the main house has been totally destroyed. As she surveyed the site on a sunny May afternoon, she wondered whether it was possible to save anything or if the entire house should be razed and rebuilt.

Still, despite her father's horrific injury, at least they were all still alive, she said.

Gardening was Shevchenko's favorite hobby, her way of relaxing. Now as she watches new life emerge from the earth amid so much destruction, it gives her hope for the future.