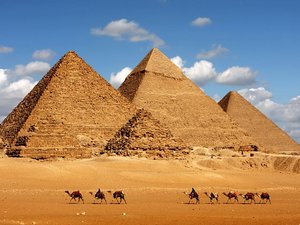 Egypt's public prosecutor ordered Monday that 13 teenage boys arrested over the weekend and accused of harassing two women tourists at the Giza Pyramids near Cairo remain in custody pending an investigation.

The arrests came after a video surfaced on social media showing a crowd of boys swarming around two young women at the famous archeological site, one of Egypt's top tourist attractions.

The boys are seen jeering at the women and some press close to them as they try to get away. One woman turns and tries to push a boy away. It is unclear from the footage whether any of the boys groped the women. A voice is heard saying the video should be sent to the minister of tourism.

A tour guide who filmed the incident with his smartphone has accused the teens of "verbally and physically" harassing the women, charges they deny, the office of the chief prosecutor said.

The video has drawn outrage on social media in this Muslim majority country where sexual harassment as well as sexual misconduct, mostly ranging from catcalls to occasional pinching or grabbing in public, is rampant.

According to a statement from the prosecutor's office, the arrested boys are between 13 and 15 years old. The statement did not provide any details on the women tourists.

If charged, the boys will be tried before a juvenile court.

Visitors to the Pyramids at Giza and other famous archeological sites in Egypt are routinely harassed and followed by young men aggressively offering tours, souvenirs, carriage or camel rides.

The problem of sexual harassment in Egypt gained worldwide attention during and after the 2011 uprising that toppled President Hosni Mubarak, when women were harassed, groped — and in some cases, beaten and sexually assaulted — during mass anti-government protests.

In recent years, women inspired by the #MeToo movement have spoken out on social media about the problem. Authorities have increased penalties for sexual harassment, which is now punishable with up to five years in prison. They have also intensified efforts to combat harassment and aggressive touts at tourist sites.