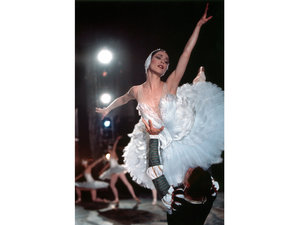 When she was 18, she was handpicked by Mikhail Baryshnikov to dance a high-profile role at American Ballet Theatre, launching a celebrated career as one of the world's top ballerinas. Now, 40 years later, Susan Jaffe has been named to lead the company.

Jaffe takes over in December as artistic director at ABT, succeeding Kevin McKenzie as the first new director in 30 years. Jaffe says her goals include making the overwhelmingly white ballet world more accessible and inclusive.

"I'm going to preserve the beauty and the depth of classical ballet," Jaffe said in an interview, "but with an eye toward where we are today in in the ballet world. And we want to be mindful of making sure that we are inclusive and doing everything we can to try to make ballet accessible and loved by everyone — because I love ballet and I want everyone to love it."

Besides finding ways to recruit a more diverse pool of dancers, Jaffe, 59, said the company would reassess some ballet classics (or parts of classics) that may no longer be appropriate for modern sensibilities. "For example, a ballet that's all about slavery and the enslavement of women maybe might not be something we want to save," she said, referring to "Le Corsaire," a traditional favorite for its bravura choreography.

Jaffe also aims to add new, modern choreographers to the company's repertoire. "I've got a list of 20 artists that I would want to bring in either to do a work already done or a new commission," she said. "That brings an array of artists that maybe ABT hasn't seen before."

The former ballerina, who has been serving as artistic director at Pittsburgh Ballet Theater since 2020, noted in a statement that this would be her seventh role at ABT, starting as a student and moving up through dancing, teaching and other roles.

In addition to her 22 years as a principal dancer at ABT — one of the top classical ballet companies in the world and, along with New York City Ballet, one of America's two leading ballet troupes — Jaffe danced as a guest with companies like the Royal Ballet, the Kirov, the Stuttgart Ballet, La Scala and many others. She left the stage in 2002.

Jaffe also served for eight years as dean of dance at the University of North Carolina School of the Arts.

In the interview, she recalled how Baryshnikov, then the director of ABT, chose her at 18 to dance a key pas de deux at the Kennedy Center in Washington, with dancer Alexander Godunov. Just a few years later he made her a principal dancer, a title she held for 22 years.

Jaffe will take over as the dance world is still recovering from the pandemic shutdowns. She said one silver lining of the pandemic was the extent to which dancers created digital content by necessity, reaching a broader audience.

"The explosion of dance in the digital form has been a silver lining of the pandemic," Jaffe said. "I think it would be silly for us to say, 'Okay. Well, it's over now. We're all just going back into the theaters' because I think there's been such a richness that has been created out of that,'" she said. "I would definitely be looking to keep and expand on that."