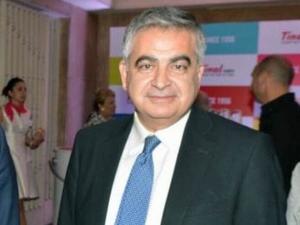 The bail figure is a record in Lebanon, a country grappling with a financial crisis seen as one of the world's worst in modern history and widely attributed to corruption and woeful governance by the ruling elite.

Brother of central bank chief Riad Salameh, Raja Salameh was arrested on March 17 by order of judge Ghada Aoun on charges of "money laundering, embezzlement, illicit enrichment and smuggling large amounts of money" out of Lebanon.

A court official told AFP Thursday that "Judge Nicolas Mansour approved Raja Salameh's release on bail set at 100 billion Lebanese pounds and has decided to seize his 40 properties in Lebanon until the end of proceedings.

"His passport was also confiscated and he is banned from travelling," the court official said on condition of anonymity.

His brother Riad is widely blamed for policies that  led to the collapse of Lebanon's currency, which has lost more than 90 percent of its value against the dollar since 2019.

Ghada Aoun also issued an arrest warrant earlier this year against Riad Salameh following a complaint by an activist group over financial misconduct.

Lebanon opened a probe into the central bank chief after a Swiss investigation identified an alleged payment by Lebanon's central bank of more than $330 million in brokerage fees to a company whose beneficiary was purportedly Raja Salameh.

In March, the EU's justice agency announced that France, Germany and Luxembourg had seized properties and frozen assets worth 120 million euros ($125 million) in a major operation linked to money laundering in Lebanon.

The seizures were linked to a probe launched by French investigators last year into the personal wealth of Riad Salameh.

What’s 3 millions when you stole 2 billions .