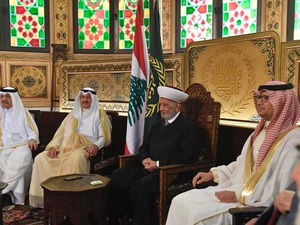 During the meeting, Bukhari expressed “the firm solidarity of the Gulf Cooperation Council countries with the Lebanese people, and our permanent keenness on Lebanon’s security, stability, territorial integrity, Arab belonging and independent political decision.”

He added: “We highly laud Dar al-Fatwa’s exerted efforts for spreading the culture of moderation and centrism, and its clerics who are deep-rooting these principles across the country, especially in their coexistence.”