Cabinet approves 1-day passport renewal for voting on May 15 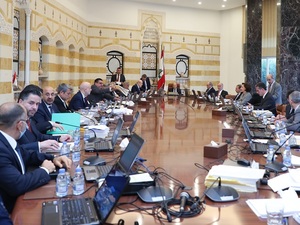 Cabinet has approved in a session Thursday to renew the expired passports for voters in the parliamentary elections.

The passports will be renewed for one day, only to be used for voting on May 15. The renewal cost will be LBP 200,000 for each passport.

During the session, President Michel Aoun asked the ministers of justice, defense and interior to control electoral bribery during the polls period in coordination with the military and security forces, as reports had emerged about illegal electoral money spending.

He also asked the ministers of defense and interior "to control the security and to prevent any possible riots."

"The safety of the polling stations is crucial to facilitate the elections process," Aoun said.

On another note, Cabinet approved an inflation aid to be added to the workers' salaries, while Prime Minister Najib Miqati denied that there will be a further currency collapse after the Parliamentary elections.

He added that he will visit Syria on Sunday to participate in a conference on renewable energy. Fayyad said he will discuss with his Syrian counterpart the energy transfer from Jordan to Lebanon through Syria.

Cabinet also condemned the killing of Palestinian Al Jazeera journalist Shireen Abu Akleh who was shot dead as she covered an Israeli army raid in the occupied West Bank.

Let’s not forget that this government and the previous one is made of “experts”…. I can confirm that they’re indeed expert crooks.