Daryan to GCC envoys: We won’t surrender Lebanon to enemies of Arabism 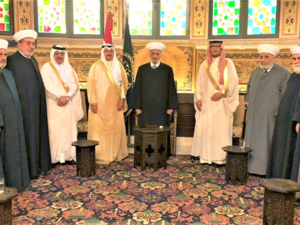 Grand Mufti Sheikh Abdul Latif Daryan on Thursday warned that boycotting elections would be “surrender,” while stressing that Lebanon should not be “surrendered” to the “enemies of Arabism.”

“The upcoming parliamentary elections are an important juncture in Lebanon’s history and we have given our directions and instructions to our Lebanese sons and brothers to take part and not to boycott,” Daryan said in a meeting at Dar al-Fatwa with the Saudi, Kuwaiti and Qatari ambassadors.

“No official has called for a boycott and voting is a religious and national decision and duty,” the Mufti added, noting that the identity of the victors would “define Lebanon’s course and its ties with its Arab brothers and friends.”

“We will take part in the electoral juncture along with our sons, boycott is surrender and we don’t want to surrender Lebanon to the enemies of Arabism,” Daryan went on to say.

These radical Sunni clerics who would sever Lebanon's life-giving links to France should be sent to the guillotine.

Another Classic! Please, keep enriching the forum with these gems. You add value to an otherwise boring forum.