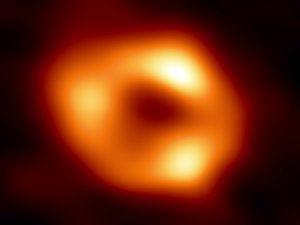 An international team of astronomers on Thursday unveiled the first image of a supermassive black hole at the center of our own Milky Way galaxy -- a cosmic body known as Sagittarius A*.

The image -- produced by a global team of scientists known as the Event Horizon Telescope (EHT) Collaboration -- is the first, direct visual confirmation of the presence of this invisible object, and comes three years after the very first image of a black hole from a distant galaxy.