Aoun slams electoral money that is 'coming from abroad' 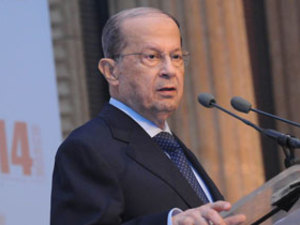 President Michel Aoun on Friday lamented that “some of the money that is being paid in the electoral juncture is coming from abroad,” adding that he is “betting on voters’ awareness and their rejection of being commodities that can be bought and sold.”

“There are candidates who are exploiting the difficult economic and social circumstances and paying money to appropriate the choice of voters, which should be free of any restraints,” Aoun told a delegation from the European observer mission that will monitor Sunday’s elections.

He added that after the elections “a new government will be formed to continue the reformist steps that were launched by the current government.”

In another meeting with the ‘Our Money is For Us’ association, Aoun vowed to “keep fighting” for citizens’ rights and to “combat corruption” until the last moment of his tenure.

“I hope the negotiations with the International Monetary Fund will lead to positive results that would lay the appropriate foundations for repairing the financial and economic situations in the country,” the President went on to say.

you mean from Iran?