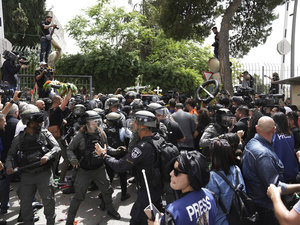 Israel and the Palestinians have traded blame over the fatal shooting of the Palestinian-American on Wednesday during an Israeli raid in the flashpoint city of Jenin in the occupied West Bank.

An Israeli officer was killed during a fresh shootout with Palestinian gunmen near Jenin on Friday.

The Israeli army said an interim investigation could not determine who fired the bullet that killed Abu Akleh, noting that stray Palestinian gunfire or Israeli sniper fire aimed at militants were both possible causes.

Al Jazeera has said Israel killed her "deliberately" and "in cold blood."

Abu Akleh, a Christian, was a hugely revered Palestinian reporter and her funeral in her native Jerusalem drew massive crowds.

The Jewish state forbids public displays of Palestinian flags and routinely intervenes against those who parade them at demonstrations or protests.

TV images showed Abu Akleh's coffin nearly falling to the ground as Israeli police grabbed the flags from the crowd around the procession outside the hospital.

Police said they had warned the crowd to stop "nationalistic" songs and were forced to act as "violent rioters (were) trying to disrupt the proper course of the funeral."

Abu Akleh's body was then transferred by vehicle to Jerusalem's Old City where, after a short church service, it moved towards the cemetery on Mt. Zion.

Thousands of Palestinian mourners attempted to follow the coffin towards the cemetery just outside the walled Old City.

Police briefly attempted to prevent the crowd from passing through the iconic Jaffa gate, but ultimately relented, allowing thousands to stream towards the graveside, and did not intervene as Palestinian flags were waved during the march, AFP reporters said.

There was a tense calm in the city as crowds dispersed following Abu Akleh's burial.

- 'Sister of all Palestinians' -

Roads were closed along the route of the procession as Israel bolstered security to "ensure the funeral takes place safely and without violence that could endanger participants or others", an Israeli police spokeswoman said.

In a sign of Abu Akleh's prominence, she was given what was described as a full state memorial on Thursday at Palestinian president Mahmud Abbas's compound in Ramallah before being transferred to Jerusalem.

"Her voice entered every home, and her loss is a wound in our hearts," said mourner Hadil Hamdan.

The United States, European Union and United Nations have backed calls for a full investigation into Abu Akleh's killing.

Israel has publicly called for a joint probe and stressed the need for Palestinian authorities to hand over the fatal bullet for forensic examination, but the Palestinian Authority has rejected holding a joint probe with Israel.

Grief over her killing spilled beyond the Palestinian territories, with protests erupting in Turkey, Sudan and elsewhere.

She "was the sister of all Palestinians," her brother Antoun Abu Akleh told AFP.

Fresh violence erupted on Friday in the West Bank, including a raid and clashes around the Jenin refugee camp.

The Israeli officer killed was identified as Noam Raz, a 47 year old father of six. Police said he was wounded "during a shootout with armed terrorists," and later died.

The Palestinian health ministry said 13 Palestinians were wounded in the clashes, one of them seriously.

An AFP photographer said Israeli forces had surrounded the home of a suspect, besieging two men inside and firing anti-tank grenades at the house in an effort to flush them out.

In a separate incident near Ramallah, soldiers "identified a suspect throwing a brick at an Israeli car and trying to open its doors near Beit El" settlement, the army said, adding that soldiers shot and wounded him.

Tensions were already running high after a wave of anti-Israeli attacks that have killed at least 18 people since March 22, including an Arab-Israeli police officer and two Ukrainians.

A total of 31 Palestinians and three Israeli Arabs have died during the same period, according to an AFP tally, among them perpetrators of attacks and those killed by Israeli security forces in West Bank operations.

Whenever God allows an individual or group or nation to get away with opression after opression without any punishment, its a sign that he has prepared a major punishment for them. Zionist israel has no hope of redemption. The Prophets cursed the israelites due to their mischief and disbelief and the zionists are doing worse than what the ancient israelites did. It will certainly not end well. Every pharao will suffer a painful destruction. The fact that they are scared of flags and christians who came to mourn in church proves how arrogant and entitled they are. To those who support israel, may God send you people and situations who do to you what israel has done to others.