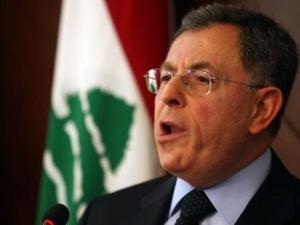 Ex-PM Fouad Saniora has called on the Lebanese to vote for a “strong state” and against “gun silencers and explosives,” in an apparent jab at Hizbullah, a few days ahead of the May 15 parliamentary elections.

“We are building and they are destroying and sabotaging. We are the ones who want Lebanon to be Arab, sovereign and independent in words and deeds,” Saniora said at a press conference.

“To topple the statelet and get rid of the hegemony of illegal arms over the country and military, security, judicial, legislative and executive institutions and over their decisions and directions, we call on you to take part heavily in these elections, and to vote for a strong state governed by the constitution and laws, not by the barrels of rifles, silencers and explosives,” the former premier added.

He is backing one of the main electoral lists in Beirut’s second district and several candidates in a number of regions, despite a decision by al-Mustaqbal Movement not to get involved in the elections.

Noting that “Hizbullah’s project contradicts with political and national realism and with the law of nature,” Saniora addressed Lebanese and Arab Shiites as “our people.”

“You are our Shiites and our people,” he said.

“We engaged in joint struggles to achieve the rise of Lebanon, a country for all its sons without discrimination. We stood together and defended Lebanon’s independence, sovereignty and Arabism for long decades. We confronted and together withstood the Israeli occupation and together we fought the Israeli tanks across Lebanon,” Saniora added.