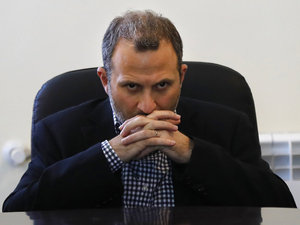 Free Patriotic Movement chief Jebran Bassil on Friday said anew that he is in favor of “peace with Israel,” while adding that such a peace would have its “conditions.”

“I would like to see us reaching peace with Israel and Hizbullah does not agree with me in this issue,” Bassil said in an interview on LBCI television, a few hours before electoral silence begins for Sunday’s parliamentary elections.

“We must reach peace but peace has its condition,” he added.

Asked about visiting Syria “as a presidential candidate,” Bassil said such a scenario is not on the table.

As for the post-elections period, the FPM chief said: “We must have two courses -- the first is the formation of a government and the election of a president, and the second is real dialogue about the issue of the system, including decentralization, the defense strategy and halting the collapse.”

Separately, Bassil said the FPM holds Speaker Nabih Berri “largely responsible for everything that happened to the presidential tenure” of President Michel Aoun.

The constitution should have a stipulation that prohibits those under 145 cm from running for public office.

in civlized countries he can't even use the front seats as it's also prohibited for children or any adult below 150cm.

If he won the election and approached Israel with the intention of forming peace, he would certainly have a positive response from the other side. What I would be afraid of would be the negative reaction of Hizballah which could very easily end with his assassination.

How many children and other civilians have israel killed the past 12 or so months? Why do you guys love to kill children so much?

Bassil, you can't even make peace with lebanese, how will you make peace with the children of satan? You and your Daddy in law have failed miserably. Go join SLA and work as a cleaner for the christian-hating jews.