Djokovic responds to Alcaraz loss ahead of French Open 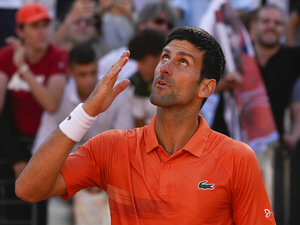 That loss to Carlos Alcaraz seems to have motivated Novak Djokovic to step up his game.

Just in time, too.

A week after his defeat to the 19-year-old Alcaraz in Madrid, Djokovic won the Italian Open without dropping a set on Sunday for his first title of the year.

Having missed a large portion of the season because he wasn't vaccinated against the coronavirus, the top-ranked Djokovic beat Stefanos Tsitsipas 6-0, 7-6 (5) for his sixth Rome title.

Now, both Djokovic and Alcaraz need to be considered as top favorites for the French Open, which starts next Sunday.

"I go there with the highest ambitions," Djokovic said. "I really like my chances. … The way I've been feeling on the court and off the court in the last few weeks, I really think I can go far."

The status of Rafael Nadal, who has won 13 of his record 21 Grand Slam titles at Roland Garros, remains uncertain after the Spaniard's Italian Open ended earlier than expected when his chronically injured left foot began bothering him again.

As for the women, the overwhelming favorite is Iga Swiatek, the top-ranked player from Poland who defended the women's title in Rome by overwhelming Ons Jabeur 6-2, 6-2 to extend her winning streak to 28 matches.

Swiatek was a surprise champion at the French Open in 2020 when she was ranked No. 54. Now the 20-year-old Polish player goes to Paris on a completely new level.

"I already know that I did some great stuff this season, so I feel like I can just play freely," Swiatek said. "For sure the expectations around are higher, but I never had a problem to cut it off and not to think about it. Also I'm gaining experience at that."

Swiatek has won five straight titles during her run.

"All these tournaments that I've won seem pretty surreal right now," she said.

"That was a close, close match," Djokovic said. "He deserved to win, but it was really one point that decided the winner. I was satisfied with the level that I was playing."

Djokovic's experience — he has won 20 Slams — might give him the edge on the favorites list for Paris. Especially since Alcaraz has never been past the quarterfinals of a major.

Djokovic, who was deported because of his un-vaccinated status ahead of the Australian Open, hadn't won a tournament since raising the Paris Masters trophy in November.

Djokovic said the ordeal in Australia was "as much as I've felt pressure in my life and my career, that was something really on a whole different level."

It was Djokovic's 12th final at the Foro Italico.

"This court has always been very, very special," he said. "It's given me joy when I really needed positive sensations. Whenever my form was a bit down I've found energy in this city."

Swiatek kept her composure when she saved four break points at a crucial point late in the second set, sliding in to reach a drop shot then responding with a splendid backhand volley drop winner on the final break point after a 19-shot rally.

"I kind of shifted my attitude from, 'Whoa, she's going to spread me around now,' to, 'I'm going to get to every ball now and play every point till the last shot."

Jabeur was on a streak of her own with 11 consecutive wins entering the final after her Madrid Open title last week but the Tunisian's crafty game of drop shots and spins proved no match for Swiatek's swift movement and accurate groundstrokes.

"Iga is the No. 1 for a reason," Jabeur said. "She's really the leader here on tour. I personally have a lot to learn from her."

The last player to win more consecutive matches was Justine Henin, who won 32 straight over 2007 and 2008. The all-time longest streak belongs to Martina Navratilova, who had a run of 74 in 1984.