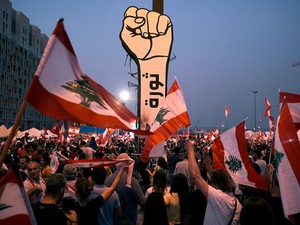 After roaming cities chanting "Shiites, Shiites," a group of youths on scooters descended on Martyrs Square overnight and burned down the "revolution fist".

It was interpreted by independents as a gesture of spite by Hizbullah, after the election of Elias Jradeh and Firas Hamdan in the South III district for seats that Hizbullah and its allies had not lost in three decades.

The ministry of interior had announced the final results on Monday night. The first breakthrough had already been confirmed by early results but the second was a surprise to both parties.

The "revolution fist" had become a visual symbol of the secular protests that swept Lebanon in October 2019 and had raised hopes of democratic change.

The movement lost momentum as Lebanon's ruling cartel of sectarian political barons bided their time and one of the sharpest economic downturns of our time muffled popular discontent.

The parliamentary elections were a first major test for those in the protest camp who chose to enter the political fray.

17 candidates who backed the 2019 protests won seats. At least twelve of them will sit in parliament for the first time.

Another major satisfaction for those described in Lebanon as the "thawra" (revolution, in Arabic) candidates, was the defeat of several reviled MPs loyal to the Syrian government of Bashar al-Assad.

Hizbullah and Amal retained all 27 parliament seats reserved for Shiite lawmakers but other allies lost ground.

Hopefully, the security forces that did a marvelous job during the election process will descend on these tugs and arrest them for sure!

Is there a chance that Hiding Hassan will shift his immense weigh and start cooperating with other ministers to pursue everyone's collective best interests, instead of only Hezbollah's and Iran's self-interests in Lebanon?

I remember once when my brother in law met a lebanese shia woman when visiting a friends house and she greeted him by saying something along the lines of "al shee3a 3ala rasak". She wasen't even religious or God-fearing. Just a secterian divider just like how right wing maronites tend to be non-religious but filled with hate and division in the name of their sect. Disgusting.

just curious. what sect do you belong to "supportbeirut"?

ثورة "revolution" Naharnet, with this insulting "27 parliament seats reserved for Shiite lawmakers", is anxious about revolution coming to Lebanon, when the majority demands majority rule.

Which "majority" you speak of numbskull? The Alawite Catholics? No wait, the Armenian Jaafaries. The Orthodox Evangelicals? Or maybe the Presbyterian Jews when combined with the Shafi3i Scientologists and Buddhists for Allah. Yup the last ones, they are the majority for sure! I just finished counted them with the help of Noam Chomsky and the electronic abacus he invented, they are definitely the majority and they should demand to rule or guillotine anyone who stands in their way.

Until such time as the Chamber enacts new electoral laws on a non-confessional basis, the distribution of seats shall be according to the following principles:

Equal representation between Christians and Muslims.

Chris, you've staggered into the most important part of Article 24 of the Lebanese constitution, but your ignorance and bigotry prevents you from understanding why it was put there in the first place. Here's why:
Article 22
With the election of the first Chamber of Deputies on a national basis, not sectarian, a new Senate shall be established in which all religious communities are represented and whose power shall be limited to supreme national causes.

The Chamber elected in 1992 was the one that should've enacted the non-confessional law, elections that most Christian voters boycotted because of Syrian interference.

And do you know why Article 22, and thus neither was the part of Article 24 you quote, was not implemented then or since? Do you even care to lean why or you'd rather remain the ignorant bigoted idiot we all know and love?

Who completely controlled Lebanon politically and otherwise from 1992 and 2005?
What real power did the Christians have and where were their leaders from 1992 and 2005?
Who, and allies, controlled the political life in Lebanon, indirectly and then directly, and prevented and impeded the parliament and governments from working constitutionally since 2006?
Why didn't the powers in charge since 1992 do anything about Article 22 of the constitution?
The only thing related to Article 22 we got from those in real control was lip service, they've used it as a red herring.

The elections and people choices confirmed without any doubt that Lebanon and Hizbollahstan are two different countries with nothing in common. Hizbollahstan has raped Lebanon in broad daylights and destroyed our economy as in every Iranian satellite state invaded by Suleimani's kiss of death. Hopefully for a peaceful division as in Czechoslovakia, but even Yugoslavia division is a batter option, redefining the meaning of resistance and liberation to save a nation. Lebanese Basij are our enemies but we have first to take care of the Useful Idiots among us that sold our freedom, independence, dignity, and civility to the criminal Iranian and Assad regimes.