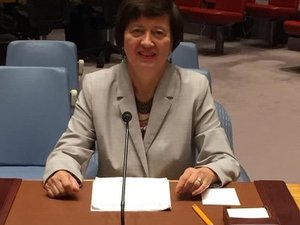 United Nations Special Coordinator for Lebanon Joanna Wronecka on Tuesday congratulated Lebanon on the conduct of parliamentary elections on May 15, which she said “enabled the Lebanese people to exercise their democratic right to select their representatives and make their voices heard.”

“I was pleased to see that the Lebanese authorities delivered parliamentary elections within the constitutional timeline. It was important for the Lebanese people to have a say in choosing the political leadership they believe can tackle the country’s challenges. The elections were a vital expression of Lebanon’s citizen engagement, which should serve to strengthen the country’s institutions,” the Special Coordinator said.

Wronecka welcomed the role played by European Union, other international and local observers in the elections process and noted the preliminary statement of the EU Election Observation Mission Lebanon.

Underlining that the elections are not an end but rather a starting point, the Special Coordinator urged Lebanon’s political leaders to put the country’s interests first and “engage constructively to ensure there will be no vacuum nor paralysis in much-needed institutional decision-making, in particular through the swift formation of a reform-oriented government.”

To this end, the Special Coordinator noted “the important role of the new Parliament in working with the government to prioritize the implementation of reforms and Lebanon’s recovery, including through a final agreement with the International Monetary Fund.”

“Adoption of the necessary legislation will also be critical for expediting the reform process,” she added.

The Special Coordinator also stressed that Lebanon’s rescue and recovery process would remain incomplete in the absence of women’s full participation and representation. “I note that eight women have been elected to the new Parliament. I hope this can be built upon to improve women’s representation in all future national decision-making,” the Special Coordinator said. She also underlined the need for youth participation and involvement.

Noting the “long-standing partnership and cooperation” between the U.N. and Lebanon, the Special Coordinator expressed the U.N.’s readiness to continue supporting Lebanon through the recently adopted U.N. Sustainable Development Cooperation Framework and the implementation of relevant U.N. resolutions, particularly Security Council Resolution 1701 (2006).