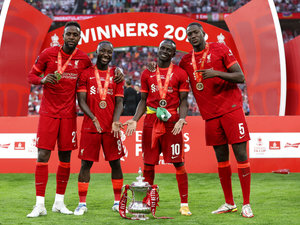 A look at what's happening in European soccer on Tuesday:

Liverpool looks to extend the Premier League title race with Manchester City to the final round on Sunday by avoiding defeat at Southampton. In reality, though, a win at St. Mary's Stadium is necessary to stand a realistic chance of catching City. Liverpool is four points behind City so needs to beat Southampton and then Wolverhampton on Sunday and hope City slips up against Aston Villa on the same day. A loss for Liverpool means City wins a sixth league title in 11 seasons. A draw leaves Liverpool three points behind and with an inferior goal difference of seven compared to City. Liverpool manager Jurgen Klopp said he will make changes following the energy-sapping FA Cup final against Chelsea on Saturday, when his team won on a penalty shootout after extra time. Mohamed Salah and Virgil van Dijk are doubts after sustaining injuries against Chelsea. Southampton is in 15th place and safe from relegation. In the Championship playoffs, Nottingham Forest takes a 2-1 lead into the second leg of its playoff semifinal against Sheffield United. The team that advances will take on Huddersfield in the final at Wembley Stadium on Saturday for the right to play in the Premier League next season.