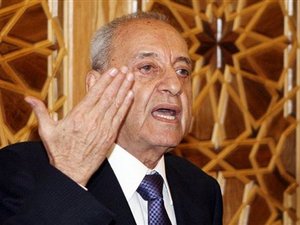 Parliament Speaker and Amal Movement leader Nabih Berri on Tuesday called on all forces that competed in the parliamentary elections to "respect the choices of the people" who voted.

“Some claim a link to the principles of independence and sovereignty, while in their performance, behavior and political rhetoric are deeply immersed in slavery and subordination to the interests of foreign forces,” Berri decried.

Calling on all parties to “put aside the tense and provocative political and electoral rhetoric,” Berri said all “hot heads” must cool down and everyone must become convinced that it is the destiny of the Lebanese to “live together as the sons of the same country.”

“No one and no sect wants to eliminate another sect,” he stressed.

He accordingly called on all political forces and parliamentary blocs to engage in “serious dialogue, in partnership with all honest and serious civil society forces, to bury this (electoral) law that harms partnership and represents a magic spell for deepening the distribution of quotas and sectarianism.”

“It’s about time for a non-sectarian law” and for “lowering voting age to 18 years, introducing a women’s quota and establishing a senate in which sects would be fairly represented,” the Speaker added.

Joke of the Century... The only thing preventing Lebanon for moving to a non-sectarian modern state is Shia voters lack of democracy behaving like indoctrinated Basij. We know they are not the majority of Shiaa, unfortunately until they get rid of HizbIran arms and phony Beri; their vote will be hostage to arms, oppression and imaginary victories. Hizb and duo support is a mile wide but only an inch deep and beginning to crack; not unlike the 99% support in Iran, Saddam's Iraq or Libya's Kaddafi before their fall. HizbIran legitimacy is over. Disarm now or divide the County so Hizbollastan can keep worshiping its arms and transforming Lebanese Shia into brainless Basij. We greatly miss you Imam Moussa Sadr, one of Lebanon's giants!

Does Berri mean when he speaks of a sectarian voting law Article 24 of the Constitution which reserves half of the parliament for Christians? "Until such time as the Chamber enacts new electoral laws on a non-confessional basis, the distribution of seats shall be according to the following principles: Equal representation between Christians and Muslims."

Ya sites, you have in there for 30 with more power and manipulation and deals under the table and you could not do anything, or let alone bring it up. Why now? You're 80 years old, you got enough $$$ to retire. What are you still doing there.

The only proper vote to settle this issue and keep it forever is the One Man one Vote based on majority rule. No more lists that contain people that have no plan, no one knows who they are and end being MPs simply because a specific list won. BS.

How about passing new laws that make it easier to vote and to discount votes that have been tampered with like what happened with the mainly shia areas and documented to boot.

Also, put in controls in place so that a party is not responsible for the expatriate votes.