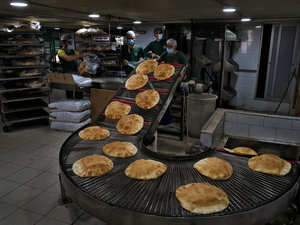 Consumed daily by billions of people around the world in bread and other flour-based products, wheat is a basic food staple, making current record prices for the cereal a global concern.

Since then, wheat-exporting powerhouse Ukraine has struggled to sell and sow its crops, putting consumers in poor countries at risk of poverty and even famine.

Sebastien Abis, head of the Demeter agricultural think tank in Paris and an expert at the Institute for International and Strategic Relations, explains what's at stake:

- Is it possible to replace wheat with something else? -

"It's very difficult. Wheat is the most important cereal for global food security: it is eaten by billions of humans in the form of bread, flour or semolina.

"Corn is grown in larger quantities but is mostly used for animal feed or for industrial purposes.

"Beyond its nutritional qualities, wheat is a very social and democratic product, enabling people to make low-cost food -- and it is often subsidized."

- But prices are putting it beyond the reach of consumers in some countries such as Lebanon? -

"Yes, because of shortages and because you can't produce it just anywhere. You can grow it in temperate climates, but there are only a dozen countries that produce a lot and can export it, particularly Russia, Ukraine, the United States, Australia.

"In recent years, the United States has produced less and less because they are switching to corn and soya . After the Soviet period, the two countries that surged ahead were Ukraine and Russia.

"Ukraine accounted for 12-13 percent of global exports in recent years."

- Is the lack of Ukrainian production the reason for the current situation? -

"We have at the same time a dreadful geopolitical situation, with multilateralism faltering, to which we must add worrying climatic events, with droughts in the southern Mediterranean basin, worries in the United States and in Europe.

"India, which had an exceptional harvest last year and reserves that enabled it to sell more on the markets, has been hit with a terrible drought and will not be able to export.

"Prices that were already high before the war are now exploding: wheat reached 440 euros ($463) a ton on the Euronext market on Monday."

- That came after India announced it would no longer export wheat. Why? -

"India had announced a rather ambitious target of exporting 10 million tons. It had sold around 3-3.5 million tons before it put its export ban in place, so one of the questions is whether it will honor its commitments.

"The situation is tense because there's no country that can put more than usual into the export market. Perhaps Russia will if it has a good harvest.

"But even if the war stopped, Ukraine's production and exports will not bounce back immediately."

- Have we reached the peak of the crisis, ahead of the harvests in the U.S. and Europe this summer?

"We have real long-term risks. We still haven't seen all the shocks, because on global markets for the last two months we've been seeing fulfilments of contracts signed before the Russian invasion. We're now entering the hard part."

"For wheat, we have around 270 million tons for a planet that consumes around 800 million a year. Around half are in China which has one year's consumption in reserve. Excluding China, cereal stocks are at their lowest level in 25 years.

"We need international solidarity and cooperation. We can't leave countries to struggle on their own for food security but at the same time you can't be surprised that some countries are looking out for themselves first and foremost.

"We need to produce everywhere where we can produce, notably in Africa. But for that we need peace and security".