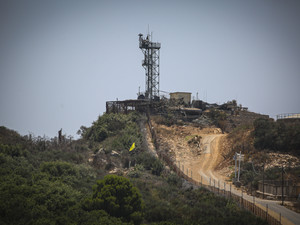 A blast was heard on the southern border Thursday as Israel said it accidently fired interception missiles due to a "misidentification."

"No drone had crossed from Lebanon," the Israeli army said.

Alert sirens were activated in Israel’s upper Galilee region, on the border with Lebanon, as the Iron Dome's interceptors shot at an Israeli aircraft, the times of Israel said.

"The military did not say whether the craft was destroyed but Hebrew media reports indicated it was not," the Israeli daily said.

"The situation has returned to normal," Israeli army spokesman Avichay Adraee said in a tweet.

Two days ago, the Israeli army said it had “detected” a Hizbullah drone that crossed from Lebanon into Israel.