Bread sold on black market for LBP 30,000 amid crisis 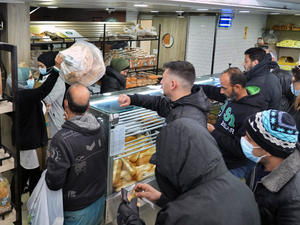 On Thursday, bags of Arabic bread were being sold on black market for up to LBP30,000 per bag, the National News Agency said, as stores and supermarkets in Nabatiyeh only received a scarce quantity.

Six mills had stopped operating, according to Antoine Seif, the head of the Syndicate of Bakery Owners in Mount Lebanon, as the central bank failed to pay for wheat at the silos.

According to Economy Minister Amin Salam, a line of credit of $21 million is needed to subsidize the quantity of wheat.

Head of the National Federation of Worker and Employee Trade Unions in Lebanon Hussein Wehbe Mogharbel said workers cannot afford going to work anymore as fuel prices surged in the past days, with a continuous drop of the LBP exchange rate on the black market.

Mogharbel urged the government to "protect the food security of the Lebanese" and to "deter those who are threatening the citizens' livelihood."

"Some merchants and station owners are getting rich at the expense of the poor," Mogharbel said.

Salam had warned that measures will be taken against “mills that might monopolize the subsidized flour.”

He reassured that the bread subsidization will not be lifted, adding that he will ask the Ministry of Finance to pay for the wheat ships in an upcoming Cabinet session on Friday.

Ali Ibrahim, the head of the Syndicate of Bakery Owners in Lebanon said the bread issue cannot be postponed until Friday's session but must be solved as soon as possible. He added that the price of an Arabic bread bag will increase by LBP 2,000 due to the surge of the dollar exchange rate on the black market.

The Lebanese Lira had further dropped in the recent days, reaching 30,600 Thursday against the dollar.