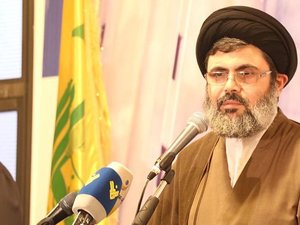 The Israeli army accused Friday Hizbullah of "exposing civilians to danger" by transferring arms on civilian flights from Iran to Damascus.

Israeli army spokesman Avichay Adraee claimed in a tweet in Arabic that the transfer is managed by Reda Safieddine, son of Head of Hizbullah's Executive Council Hashem Safieddine.

He added that Israel will continue to monitor all attempts by Hizbullah to threaten the security of Israel and protect its citizens.

"Terrorist Hizbullah is using the state of Lebanon and its citizens for terrorist purposes that serve the Iranian interest," Adraee went on to say.