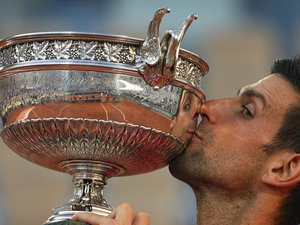 For the first time in a year, Novak Djokovic and Rafael Nadal are both entered in a major tournament — and, somehow, most of the buzz heading into the French Open is about Carlos Alcaraz, a teenager without one Grand Slam title to his name.

There's plenty of reasons to keep tabs on Djokovic and Nadal when play begins Sunday. They're two greats of the game who have played each other more than any other two men in the Open era, including nine times at Roland Garros.

Thanks to Thursday's draw, they would meet in the quarterfinals this year, if at all, with a possible matchup against Alcaraz awaiting in the semifinals.

Nadal is a 13-time champion in Paris, owner of a men's-record 21 Slam trophies overall and only recently returned from a rib injury while also dealing with chronic pain in his left foot that kept him out of Wimbledon and the U.S. Open last year.

"All of a sudden," No. 3-seed Alexander Zverev said Friday after watching Nadal practice on-site, "his forehand is just 20 mph (30 kph) faster. He moves lighter on his feet. There is something about this court that makes him play 30% better."

Djokovic, meanwhile, is ranked No. 1, is the defending champion on France's red clay, is tied with Roger Federer at 20 majors, and, notably, sat out January's Australian Open (which Nadal won) because he is not vaccinated against COVID-19. The French Open and Wimbledon are allowing him to compete.

"Tennis fans and the biggest tournaments in sport always want to have the best players in the world participating," Djokovic said. "From that point of view, there is significance to that."

Yet it's Alcaraz — 28-3 with a tour-leading four titles in 2022, and already ranked No. 6 — who has generated so much fascination.

"He definitely is special," Djokovic said. "So far, he's the best player in the world, no question, this year. ... He's a really complete player. Can play equally well, offensively and defensively."

That's been building for a while now, reaching a crescendo after Alcaraz beat Nadal, then top-seeded Djokovic, then Zverev to win the Madrid Open in early May. No one ever had eliminated Djokovic and Nadal at the same clay tournament.

Yes, there are other story lines worthy of examination over the coming weeks. Naomi Osaka's return to Paris after her discussion of anxiety and depression and her withdrawal from the field to take a mental break a year ago; new women's No. 1 Iga Swiatek's bid for a second French Open title as she enters on a 28-match winning streak; former No. 1 Simona Halep's new partnership with Patrick Mouratoglou, who used to coach Serena Williams (will she ever compete again?).

Above all, it seems, comes Alcaraz, he of the seven consecutive wins against top-10 opponents, the big serve and smooth groundstrokes, the dancer's footwork, the drop shots delivered via forehands and backhands.

As Djokovic put it: "He's the talk of the sport."

Part of it is that Alcaraz is the Next Big Thing, someone seen as talented, hard-working and properly dispositioned enough to ascend to the top of tennis. Part of it is that he is so young, 19 as of May 5; not since his fellow Spaniard Nadal in 2005 had someone broken into the top 10 of the ATP's rankings so soon.

So part of it, then, is that there has been this question lingering for quite some time: Who will lead the way and take the mantle from the Big Three of Nadal (36 next week), Djokovic (35 on Sunday, Day 1 of main-draw competition at Roland Garros) and Federer (41 in August, coming off a series of operations to his right knee, and sidelined since Wimbledon last year)?

"The situation is changing. We are getting old, too," Nadal said. "New generations are coming strong."

In truth, not all that strong.

Consider: Djokovic and Nadal have combined to win 11 of the past 13 men's Grand Slam titles.

For a contrast, look no further than what's been happening on the women's side: No player has won more than one major trophy in any year since 2016. Or sample the variety in Paris, specifically: The past six French Open women's winners all were first-time Grand Slam titlists.

Alcaraz hopes to be a part of that Slam champ club by tournament's end.

He's only been as far as one quarterfinal at a major, at the U.S. Open in September. He's only played at Roland Garros once, reaching the third round last year.

Alcaraz, who is coached by 2003 French Open winner Juan Carlos Ferrero, says he tries to turn everyone else's expectations for him into motivation, rather than a source of tension.

"I really look forward to going to Paris," Alcaraz said, "(and) fighting for the Grand Slam."