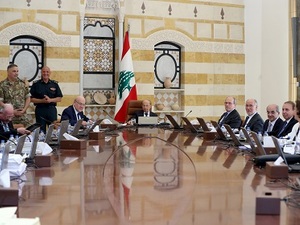 Cabinet on Friday approved the economic recovery plan amid the objection of the ministers of Hizbullah and the Amal Movement, TV networks said.

It also approved $35 million for cancer and chronic illness medicines, noting that the amount “will be provided in fresh dollars by the housing bank.”

Cabinet also approved the telecom tariff hike proposed by Telecommunications Minister Johnny Corm, which will take effect as of July 1. Corm had warned Thursday that Cabinet had a “last chance” to save the telecom sector from collapse in Friday's session.

The proposal of hiking the so-called "customs dollar" was meanwhile dropped from discussions according to TV networks.

This was Cabinet’s last session prior to becoming a caretaker Cabinet and ahead of the beginning of the term of the new parliament on May 22.

The conferees discussed an agenda of 133 items, most notably the evaluation of the parliamentary elections, the work of the ministries, financial items, loans, lines of credit, employee and university affairs, grants as well as urgent matters.

The session was held amid protests outside the Baabda Palace by cancer patients and Lebanese University professors.

At the beginning of the session, President Michel Aoun lauded “the harmony that governed relations between ministers and what they did during the short period of government’s tenure,” thanking the prime minister and the ministers for “their efforts in this regard.”

“The elections took place under acceptable circumstances despite some incidents,” Aoun added, calling on the Interior Ministry to publish the results in detail within the specified deadline to allow those who want to file appeals to make use of the data.