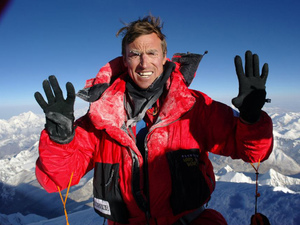 British climber Kenton Cool made headlines around the world this week for reaching the summit of Mount Everest for the 16th time, the most of any non-Nepali climber -- but says his title is largely meaningless.

Mountain guide Cool, 48, first climbed Everest in 2004 and has since had an expedition almost every year taking clients up the world's highest peak.

His 15th summit last year tied him with American Dave Hahn for the most summits by a non-Nepali climber, and his latest ascent gave him the title alone.

But he told AFP he was "surprised" by the attention.

"In reality, it's not that amazing," he said. "I'm really surprised by the interest in my 16th ascent, considering that so many of the Sherpas have so many more ascents."

Nepali guides -- usually ethnic Sherpas from the valleys around Everest -- are considered the backbone of the climbing industry in the Himalayas for bearing huge risks to carry equipment and food, fix ropes and repair ladders.

Most of them have multiple Everest summits under their belt -- Cool's own long-time Nepali climbing partner Dorje Gyalgen Sherpa made it to the summit with him, for his 20th ascent.

And this month, Nepali climber Kami Rita Sherpa extended his record as the person with the most Everest summits with 26 ascents as he opened the route for other climbers.

"It's just that I happen to hold the non-Sherpa record, for whatever that is worth, which in my mind, (is) not very much."

Still, he added that every summit was magical.

"It's work, it is how earn my money, I am an Everest guide. But more than that I love Nepal... and I love the mountains, it has been very kind to me over the years."

The climber had been told he would not walk again unaided after a rock-climbing accident in 1996 that broke both his heel bones, but his mountaineering career has confounded predictions.

In 2013, he and Dorje Gyalgen Sherpa became the first people to complete the Everest triple crown, comprising Everest, Lhotse and Nuptse, in one push without returning to base camp.

Long under the shadow as supporters of foreign climbers, Nepali mountaineers are slowly being recognised in their own right.

"In the past, Nepali climbers climbed only for the sake of work," said Ang Tsering Sherpa of Nepal Mountaineering Association. "But the younger generation is educated, many climb by choice and are being recognised better."