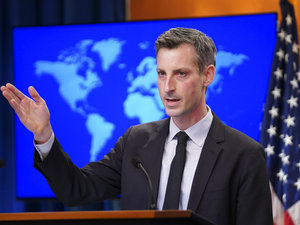 The United States on Friday urged Lebanon's leaders to move urgently to form a government and address a crisis-wracked economy after elections raised fears of new political deadlock.

"We urge those elected and the country's political leaders to heed the Lebanese people's call for change and to work seriously, and with urgency, to take the necessary actions to rescue the economy," State Department spokesman Ned Price said.

"We also urge the swift formation of a government capable of and committed to undertaking the hard work required to restore the confidence of the Lebanese people and the international community," he said in a statement.

Hizbullah, an Iranian-backed party considered a "terrorist" group by Washington, with its allies lost a parliamentary majority in Sunday's vote as independents made a surprise breakthrough.

The U.S. statement saluted the holding of elections on time but voiced concerns about "allegations of vote buying, clientelism and reports of intimidation."

Lebanon's fragile political system reflects attempts to balance between religious communities in the wake of the 1975-1990 civil war.

The election was the first since Lebanon plunged into an economic crisis and suffered a massive explosion that devastated the Beirut port in 2020.